Saqib Mahmood is the leading wicket-taker of the tournament with 12 scalps.

Peshawar Zalmi and Lahore Qalandars are all set to take part in the 17th match of the 2021 Pakistan Super League. The game is the second of Thursday’s doubleheader at the Sheikh Zayed Stadium in Abu Dhabi.

The Zalmi, captained by left-armer Wahab Riaz, have done reasonable, winning three out of five games. They began with a loss, but then won three matches on the trot to find some momentum. However, they lost to the Karachi Kings by six wickets.

In their next match, the Zalmi will be up against the Lahore Qalandars, who are sitting in a comfortable position. In their last meeting, the Qalandars beat the Zalmi by four wickets.

The pitch in Abu Dhabi has generally been an excellent one for batting. During the 2020 IPL, the ground produced scores over the 170-run mark on a pretty consistent basis. Though a couple of low scores were recorded, on a number of instances, the pitch hasn’t been tough for batting. Moreover, the teams, batting second have gotten a fait amount of advantage.

Playing combination for PES vs LAH

Mohammad Hafeez has been in stupendous form over the last few months. Not only has he done well for the Pakistan national team, but also for the Qalandars in PSL 2021. Even into his 40s, the veteran hasn’t shown signs of slowing down. In the matches thus far in the tournament, Hafeez has scored at an average over 90 and his strike-rate of 175 is also on the higher side.

Saqib Mahmood has been excellent for the Zalmi thus far in PSL 2021. In five matches thus far, the right-armer has picked up 12 wickets at an economy rate of 7.98. While bowling at the death, he has shown great control over line and length. Moreover, he is also the leading wicket-taker of the tournament and a lot will depend on him if the Zalmi have to win their next match. 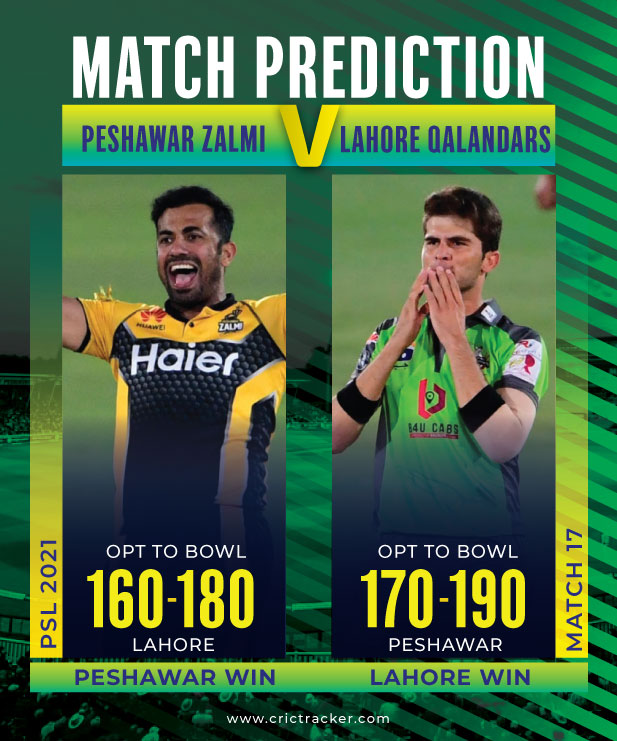