Faf du Plessis' participation in the game is uncertain after he suffered from a concussion last time around.

The Lahore Qalandars are one of the top contenders to qualify for the playoffs in the 2021 edition of the PSL. However, after the 28-run defeat at the hands of Islamabad United, their confidence would have gone down a wee bit.

Their next match is against the Quetta Gladiators on Tuesday, June 15. The Gladiators, on the other hand, are languishing at the bottom of the points table and need to win all their last three games to make the next round.

In their previous meeting against the Qalandars, they lost by nine wickets. Concussions to Faf du Plessis and Andre Russell haven’t helped their cause by any means.

The pitch in Abu Dhabi has been a sporting one thus far in the tournament. The fast bowlers and spinners have churned out a significant amount of assistance. The batters have also been able to play their shots on the up. In both the afternoon games at the Sheikh Zayed Stadium, the team, batting first, has reaped a fair bit of assistance.

Playing combination for QUE vs LAH

Mohammad Hafeez hasn’t had the best of times in the UAE leg. In three games, he has only managed 39 runs with his last two knocks fetching single-digit scores. However, if the overall numbers are churned out, he has 220 runs at an average and strike rate of 44 and 154.92 respectively. With two half-centuries, Hafeez has shown the damage he can do.

Rashid Khan, without much of a doubt, has been the standout batter for the Qalandars in the tournament. With seven wickets under his belt, the Nangarhar-born has shown the impact he can make with the ball. Though he couldn’t get a wicket in the previous game, he is good enough to make a comeback. His confidence would be high after the fifer against Peshawar Zalmi. 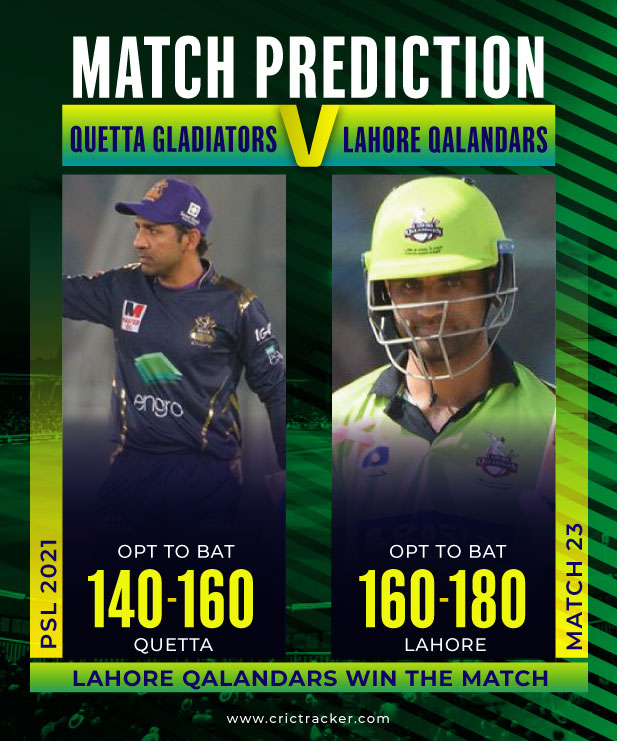