In their last meeting, Peshawar came out trumps by three wickets after they chased down 199 in 19.3 overs.

Peshawar Zalmi are in a bit of strife in the ongoing edition of the PSL. Having lost their last two matches, the Wahab Riaz-led unit are placed at the fourth spot in the points table.

In their last game against the Lahore Qalandars, they lost by 10 runs after Rashid Khan picked up a five-wicket haul. Their bowlers did a decent job in the powerplay after which they lost their way.

In their next match, the Zalmi will be up against the Quetta Gladiators, captained by Sarfaraz Ahmed. In their last meeting, Peshawar came out trumps by three wickets after they chased down 199 in 19.3 overs.

The track in Abu Dhabi has had something, mostly for the spinners and batters. The leg spinners have extracted quite a bit of assistance from the surface. The teams batting second have found it a tad tough to get going.

Hence, batting first should be the way forward. The playing conditions will be clear with the temperature around 34 degrees Celsius. The humidity will be in the 60s.

Playing combination for QUE vs PES

Though he has faltered as a skipper of the Gladiators, it goes without saying that he’s the standout batter for the Gladiators. In five matches, the right-hander has notched 185 runs at an average and strike rate of 146.82.

When the two teams last met, Sarfaraz notched 81 runs off 40 balls with 12 fours and one six, though his team went on to lose the match.

Wahab Riaz has been a standout performer for the Zalmi in PSL 2021 thus far. In five games, the left-arm pacer has picked up nine wickets, though at an economy rate of 9.15.

Being one of the more experienced fast bowlers in the team, Wahab has to step up. The last time around against the Gladiators, he picked up two wickets and leaked as many as 54 runs. 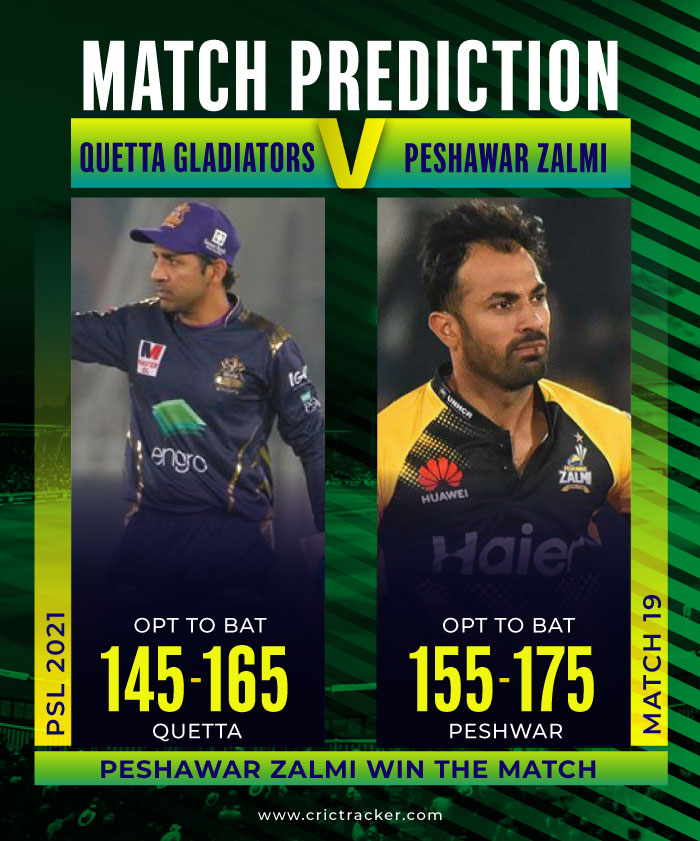