Islamabad United will be facing off against Peshawar Zalmi in the 24th match of the Pakistan Super League (PSL) 2022 at the Gadaffi Stadium in Lahore on Thursday. Both teams are battling it hard with the league phase nearing its business end and would hope to inch a step closer towards securing a playoff berth with a win. The Islamabad United snatched victory from the jaws of defeat against the bottom-placed Karachi Kings in their last match and are currently placed at the third spot in the points table with four wins from seven games.

Peshawar Zalmi, on the other hand, had a brilliant outing in their previous game against the Quetta Gladiators as they registered a 24-run victory. That win was a confidence booster for them. As of now, the Wahab Riaz-led side occupy the fourth place in the PSL 2022 points table, having won four out of their eight matches and would now be hoping to register a third straight win on Thursday. At the same time, Peshawar would also be looking to improve their net run rate, which is -0.489.

The Lahore wicket has seen many high-scoring thrillers in the second leg of the tournament and the batters have made the most of the surface. The fast bowlers have also made their presence felt but, the same cannot be said for the spinners who have found it very difficult to leave the batters bamboozled. The toss-winning captain musthave no second thoughts about bowling first and chase the target with the dew coming into play later in the game.

Peshawar Zalmi would be hoping that their veteran all-rounder Shoaib Malik scores on a consistent basis from here on as his important innings in the middle-order have turned out to be very handy for them. Malik scored a quickfire 58 runs from 41 deliveries in the last game against the Quetta Gladiators. It turned out to be a match-winning knock as Zalmi earned two precious points. The former Pakistan skipper has so far amassed 276 runs from eight matches. He would be expected to score a big one against Islamabad United on Thursday.

Waqas Maqsood became an overnight sensation after bowling a tense final over a couple of nights ago against the Karachi Kings where he picked up two wickets and also effected a run out to win the match for Islamabad. In fact, Maqsood was the pick of the bowlers for his side finishing with figures of 3/34 from his four overs at an economy of 8.5. The 34-year-old has taken 12 wickets from five matches. The United would be hoping that he continues his splendid run against Peshawar Zalmi. 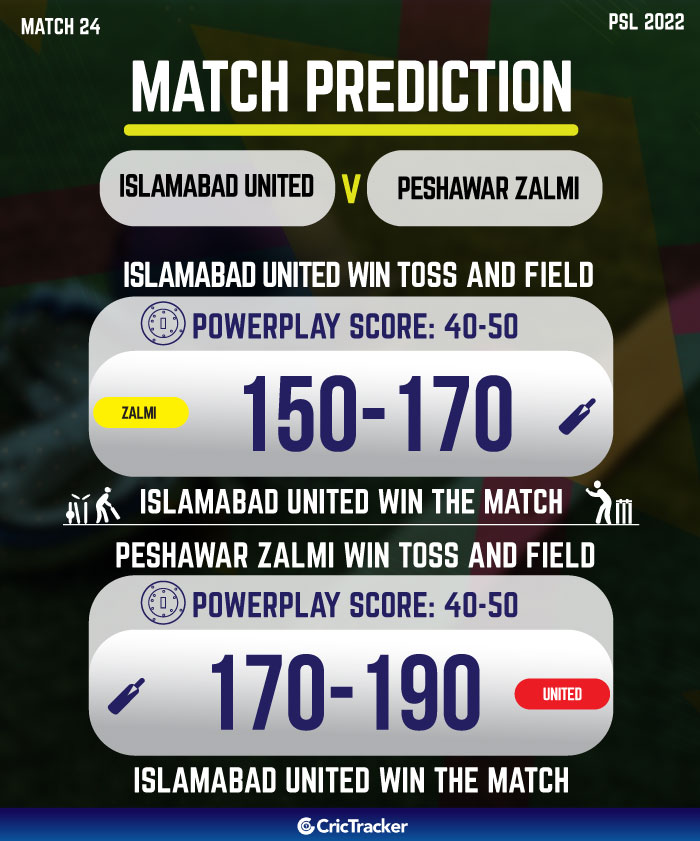