Expect this to be another high-scoring thriller.

Lahore Qalandars and Karachi Kings will go head to head in the 26th match of the 2022 Pakistan Super League (PSL) on February 18 in Lahore. Qalandars are comfortably placed second in the points table with five wins from seven games. On the contrary, the Babar Azam-led Karachi Kings are bottom of the table and can not progress to the next stage.

Apart from a surprise defeat against Quetta Gladiators, Qalandars have been very impressive and clinical in their recent games. Cricket experts believe that they are genuine contenders for the title this year. Kings, having lost every game of the 2022 PSL so far, will have their task cut out and chances of getting their first win of the tournament are also looking very bleak in front of strong looking Qalandars side.

The Lahore wicket has seen many high-scoring thrillers in the second leg of the tournament and the batters have made the most of the surface. The fast bowlers have also made their presence felt but, the same cannot be said for the spinners who have found it very difficult to leave the batters bamboozled. The toss-winning captain must have no second thoughts about bowling first and chase the target with the dew coming into play later in the game.

Sitting on top of the table after scoring 467 runs with an average of scintillating 67.00 in the tournament, Lahore Qalandars will be hoping for their premiere batter Fakhar Zaman to go all guns blazing during their encounter with Kings.  Zaman is coming off a well made fifty against Quetta Gladiators, which helped his side to register a comfortable victory over Gladiators.

Skipper Shaheen Shah Afridi will have the responsibility to knock out his counterpart Babar Azam as early as possible. Afridi who is currently placed at the fourth spot for most wickets in the tournament was awarded Man of the Match in last match played by the Qalandars. The skipper took two important wickets of Roy and Vince to demolish the top batting order of Gladiators. 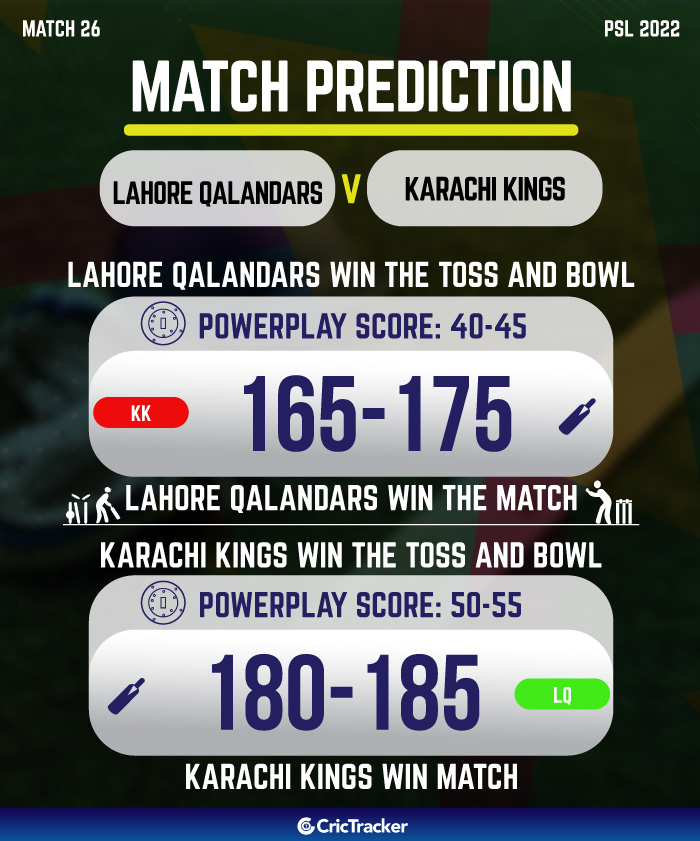