Last group match of the Pakistan Super League 2022 (PSL) will be played between Lahore Qalandars and Peshawar Zalmi on February 21. Lahore is second on the points table and they are coming in the match after thrashing Islamabad United by 66 runs. On the other hand, Zalmi also had a good outing after beating the same team by ten runs a few days back.

Both franchises will be looking to settle their squad combination before the all-important play-offs starting from February 23. As both teams are packed with some power-hitters, possibility of another high-scoring encounter is on the cards.

The Lahore wicket has seen many high-scoring thrillers in the second leg of the tournament and the batters have made the most of the surface. However, with matches being repeatedly played in same stripes, spinners from sides can get some purchase from the wicket. Both team will be looking to bowl first and restrict their opponent at a low-score and chase the target with the dew coming into play later in the game.

Ahead of the play-offs, Peshawar Zalmi would be hoping that their senior all-rounder Shoaib Malik continues his good form as he is the backbone of Zalmi middle-order. The batter recently scored 38 runs off just 23 balls smashing two boundaries and equal number of maximums against Islamabad United, which helped his franchise to win the match by 10 runs.

Sitting on fourth spot for the most wickets list of the tournament, Skipper Shaheen Shah Afridi will have the responsibility to provide early breakthrough for his side in the match. The left-arm pacer in nine matches has scalped 14 wickets in 36 overs he has bowled so far in the tournament. 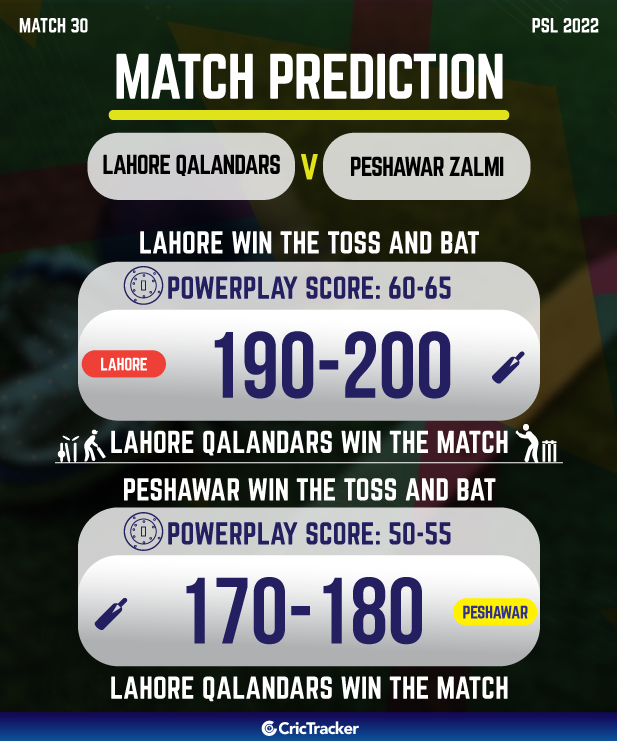