All top three batsmen of Qalandars scored runs against Team Abu Dhabi in their last meeting. It is advisable to take all of them in your 11Wickets Fantasy team.

The first Eliminator 1 of the Abu Dhabi T10 League 2021 season will be played between Qalandars and Team Abu Dhabi on 5th February, at the Sheikh Zayed Stadium in Abu Dhabi.

This match will start at 07:45 PM IST (06:15 PM local time). It will be live on Sony Sports Network and live streaming is available on Sony LIV.

Qalandars are playing against Team Abu Dhabi in the first Eliminator of the Abu Dhabi T10 League 2021. The former have registered five wins in a row, which includes a dominating performance against Team Abu Dhabi as well. The top-order of Qalandars comprises of Sharjeel Khan, Tom Banton and skipper Sohail Akhtar, all of whom are scoring runs consistently. They missed out on a deserving finish within the top two, but they have the ability to get through all the barriers and win the title.

On the other side, Team Abu Dhabi found their form back at the most important time, during the last phase of the super league. They are coming off two consecutive wins in the last two league games, which made them finish at fourth spot in the super league standings. They must be booming with confidence and will go into this game nothing to lose attitude, as Qalandars are clearly the favourites to go through. Overall, another close encounter awaits in front of us.

The temperature will be around 23 °C during the start of the game. Like always, rain is not on the cards in Abu Dhabi.

The pitch at Abu Dhabi will help the batsmen, as anything over 110 should be a good total to defend here. Bowlers also can be successful, as we have witnessed already, if they can execute their plans perfectly.

Chris Jordan is currently the leading wicket-taker for the Qalandars. The Englishman has scalped 6 wickets in the season so far at an economy rate of 8.55 runs per over.

Chris Gayle and Paul Stirling finally got back into form and at the right time. The Universe Boss smoked a 22-ball 84, followed by a brilliant 32 balls 64 from Paul Stirling in the last league game.

Jamie Overton took four scalps in the last game, which was the best bowling figures by any bowler in the 2021 season. Jamie now is the highest wicket-taker and will be a key for Team Abu Dhabi once again. 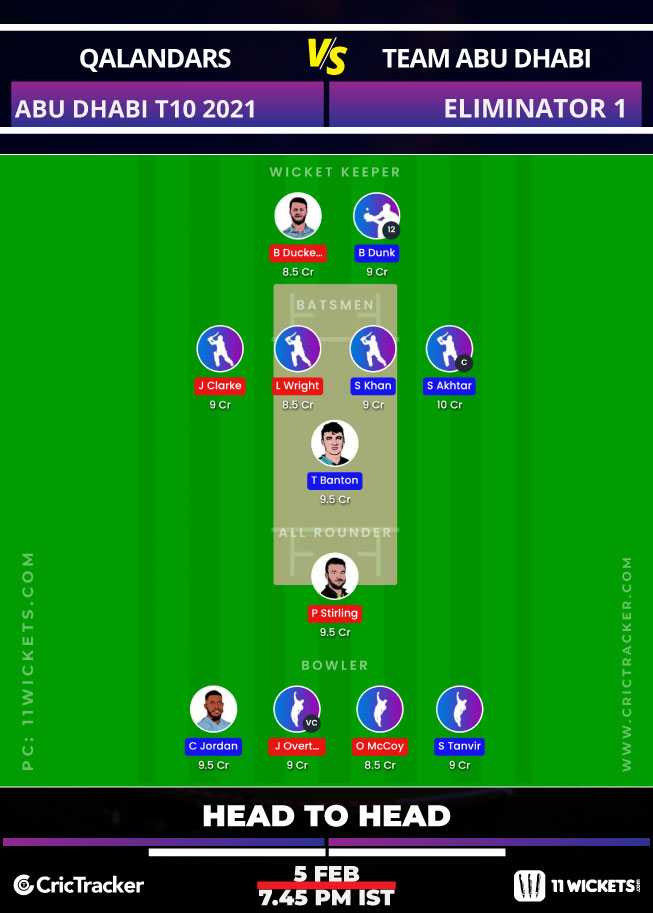 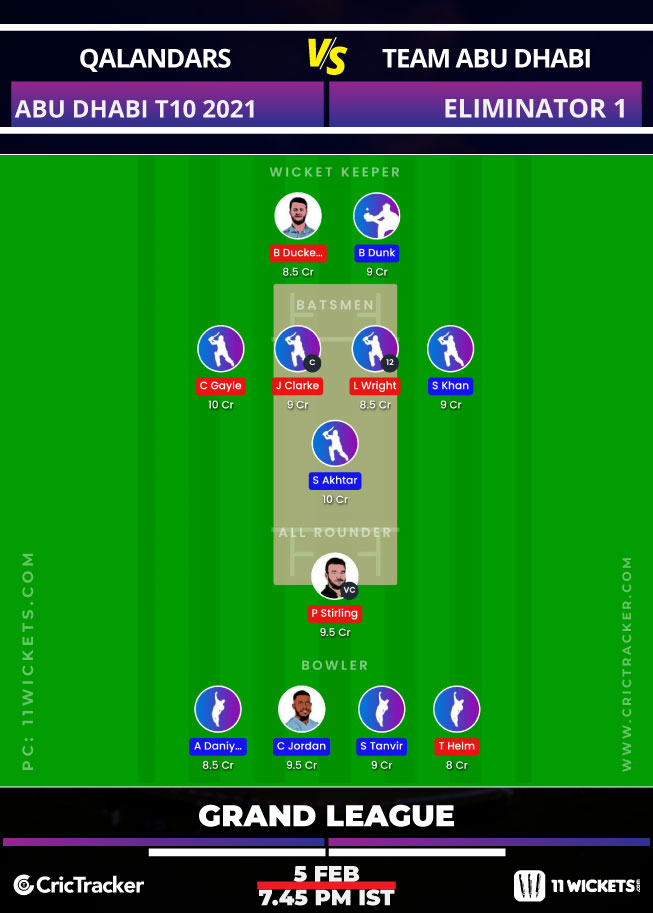 All top three batsmen of Qalandars scored runs against Team Abu Dhabi in their last meeting. It is advisable to take all of them in your 11Wickets Fantasy team.