Only one spinner features in the wicket-takers charts with the pacers enjoying conditions at this venue.

The 1st Semi-Final of Qatar T10 League 2019 will be played between the Falcon Hunters and Desert Riders at West End Park International Cricket Stadium, Doha.

Falcon Hunters and Desert Riders are pitted against each other in the second semi-final of the Qatar T10 League 2019. Both teams impressed during the league phase with the likes of Mohammad Hafeez and Mohammed Rizlan starring for their respective sides. The overseas stars on either roster have led the way which has paved the way for success.

Both teams did meet in the league phase with the Falcon Hunters coming out victorious in a fairly one-sided game earlier in the week. While this result would give the Hunters the favourites tag, the Desert Riders aren’t ones to be taken lightly with the Mohammad Hafeez-led side coming into this game on the back of a brilliant run chase of 134 over Heat Stormers.

While there is rain on the cards on Sunday, there shouldn’t be any interruption during the course of the game. The temperature will be range between 23 and 25 degrees Celsius with a cloud cover of 81% expected at the start of the match, according to AccuWeather.

The pitch is showing signs of slowing down although scores of around 100 are a common sight in this format. It shouldn’t be any different at this venue as well with the pacers reverting to change of pace on a regular basis. Chasing will be key on this surface with dew coming into play later on.

Mohammad Hafeez has led from the front for the Desert Riders with vital contributions. With 80 runs and four wickets in four games, Mohammad Hafeez has delivered for his side and will be crucial in this high-octane clash. Amad Butt is another Desert Riders’ player who has taken the Qatar T10 League by storm. His mindblowing figures of 3/0 against the Flying Oryx hold him in high regard. Sohail Tanvir is Falcon Hunters’ spearhead with the former Pakistan International picking five wickets so far at an average of 17. 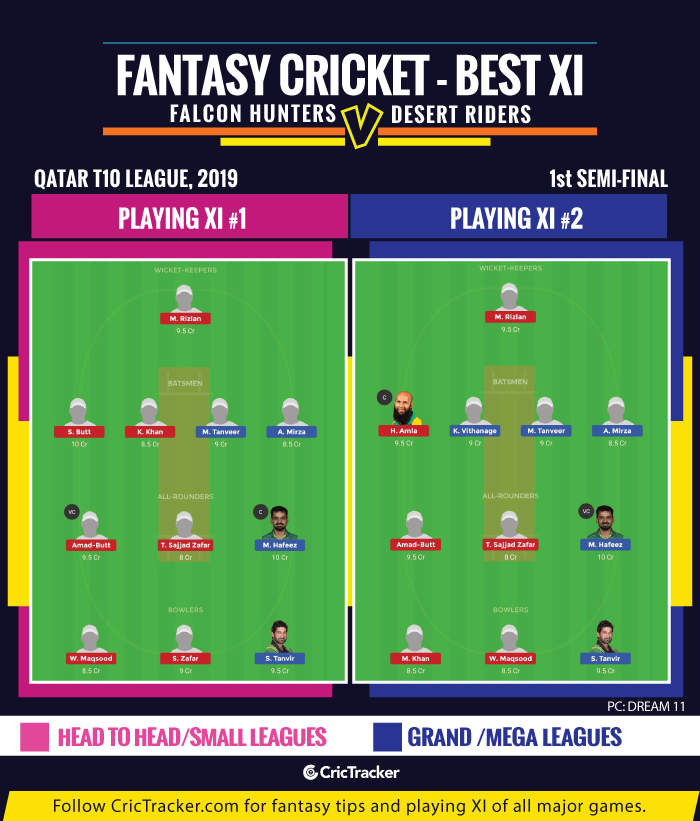 Only one spinner features in the wicket-takers charts with the pacers enjoying conditions at this venue. The likes of Amad Butt and Sohail Tanvir are more than capable of picking a wicket or two, which makes them worthwhile options for this game.

Falcon Hunters are the favorites to win this match.