Karim Sadiq will be leading the batting line-up of Pearl Gladiators.

The Flying Oryx team have a formidable lot of players in the arsenal. Andre Fletcher, who has been in sublime form lately, is expected to spread his magic in the tournament. He will be assisted by the likes of Hussain Talatm, Aftab Alam and Noman Sarwar.

Pearl Gladiators, on the other hand, will be relying on their experienced players to steer their side. Gladiators have veterans like Karim Sadiq, Sharjeel Khan, Ajantha Mendis and Mohammad Sami in their squad. Both sides will be looking forward to kicking their T10 League campaign in style.

The pitch in T10 leagues usually favour the batsmen. In the previous encounters on this venue, most teams were able to post a 160+ total on the board. Clear weather is on the cards with ample sunlight during the course of play. The temperature will hover around 27 degrees Celcius, according to AccuWeather.

Karim Sadiq will be leading the batting line-up of Gladiators. The Afghanistan international has a considerable amount of international experience under his belt. In 24 ODIs, the right-hander has gathered 475 runs including two tons. He will be joined by Hussain Talat, who has the ability to contribute in both the departments.

Andre Fletcher will steer the batting force of Flying Oryx. The right-hander scored 186 runs during the recent Abu Dhabi T10 League across 8 matches including a fifty. He will be assisted by Nouman Sarwar, who has an excellent record while donning the Qatar jersey. The all-rounder has scored 172 runs in 14 T20Is at an impressive average of 57.33. The 35-year-old has also scalped 18 wickets in his T20I career.

The prediction is Flying Oryx to win the match. 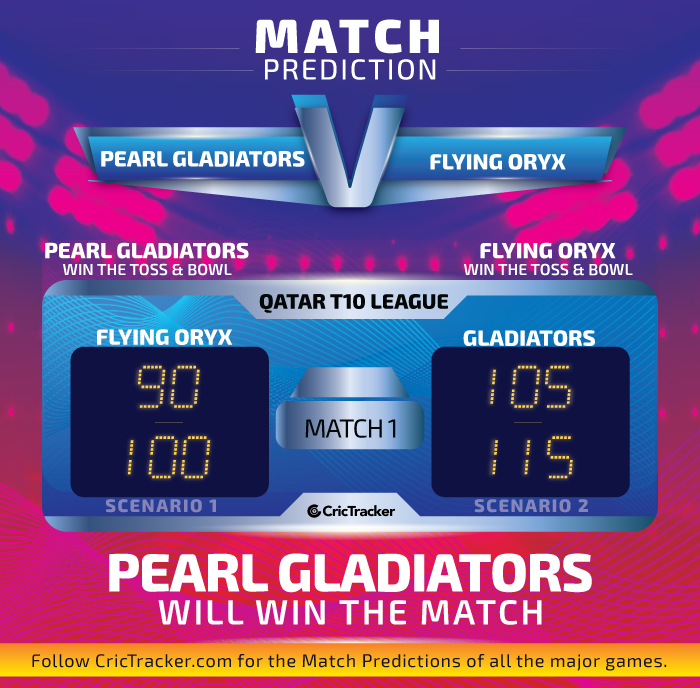