Three of the last four night games have been won by teams batting first with huge scores being posted as well.

The 15th Match of Qatar T10 League 2019 will be played between the Heat Stormers and Pearl Gladiators at West End Park International Cricket Stadium, Doha.

The final league game of the Qatar T10 League 2019 pits Heat Stormers up against the Pearl Gladiators. With only one point against their names, both sides rely on Flying Oryx losing their match against Swift Gallopers to stay alive in the competition. They haven’t won a game so far in the league.

Heat Stormers were unlucky to end up on the losing end with Desert Riders running riot with the bat. Although Pearl Gladiators have a decent amount of experience, they haven’t been able to click as a unit which has lead to their downfall. A close contest is on the cards with both sides capable of coming up with the goods on Saturday.

The weather forecast is clear for this game with the temperature hovering around 22 degrees Celsius. A clod cover of 22% along with 82% humidity is expected according to AccuWeather. The conditions should remain the same for the entire duration of the match.

The pitch is a competitive one with the average first innings score being 104. While scores of 100 were initially less in number, teams are now able to score in excess of the par score and defend them as well. Nevertheless, chasing is still the more popular option and shouldn’t be any different for this game.

Sikandar Raza joined the Heat Stormers late but has already made an impact. The Zimbabwean smashed a brilliant 87 off just 41 balls in his previous outing for the Stormers and is also capable of picking a wicket or two with the ball. Another in-form Heat Stormers player is Scott Edwards, who has 53 runs to his name so far.

Considering his past performances for the Netherlands, he is due for a big performance with the bat. Satvir Singh has also impressed in the Qatar T10 League. While he has three wickets in three games, Satvir Singh also has a knack of scoring runs at a quick rate in the top order. 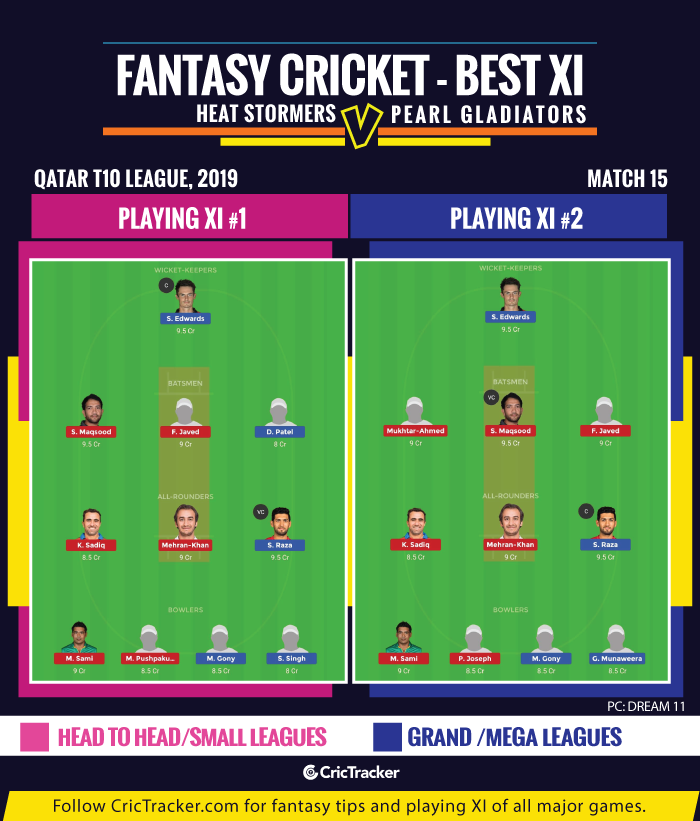 Three of the last four night games have been won by teams batting first with huge scores being posted as well. Along the same lines, one can opt for more top-order batsmen from the side that bat first in this game after the toss.

Heat Stormers are the favourites to win this match.