Although both teams have played one game each, a few changes or additions could be made to the playing XI.

The 6th Match of Qatar T10 League 2019 will be played between the Pearl Gladiators and Desert Riders at West End Park International Cricket Stadium, Doha.

The high-flying Desert Riders will face the Pearl Gladiators in the 6th match of the Qatar T10 League in Doha. Pearl Gladiators didn’t have the best of starts to their campaign after they were put to the sword by Hussain Talat of the Flying Oryx. While they are searching for their first points, Desert Riders are on a roll with Mohammad Hafeez and Ajay Lalcheta doing well for them.

On paper, Desert Riders look the stronger of the two with Sohail Tanvir leading the bowling attack. Nevertheless, the nature of the T10 format gives the less-fancied Pearl Gladiators a chance to register their first win of the season against Mohammad Hafeez and co.

The weather forecast isn’t ideal for this game with scattered thunderstorms expected on Tuesday. The chances of this game taking place are bleak with the ground facilities not being adept at tackling this problem as well.

The track at this venue is a touch on the slower side although the nature of the format demands a score in excess of 100. The average first innings score so far is 93 with the team batting second winning every game so far. Although there is a decent grass cover on the surface, the uneven bounce should help the bowlers in this game.

Mohammad Hafeez has been leading from the front for the Desert Riders. While he is due for a big knock with the bat, Hafeez has picked two wickets so far at a brilliant economy rate of just seven. Although he is known for his big-hitting, Mehran Khan wasn’t able to showcase his prowess in the opening fixture.

He is also an able medium pacer with a knack of picking key wickets in the powerplay overs. Muhammad Tanveer won the man of the match award in Desert Riders’ first game against Swift Gallopers. His knock of 49 off just 21 balls holds him in good stead for this Dream11 contest. 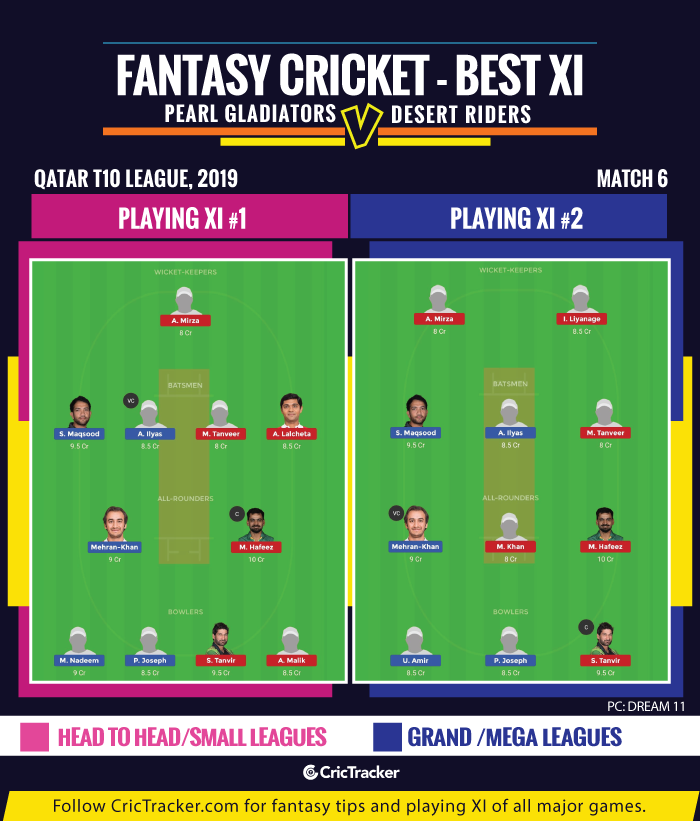 Although both teams have played one game each, a few changes or additions could be made to the playing XI. Picking players who are certain to feature such as Mohammad Hafeez and Mehran Khan would be a safe option.

Desert Riders are the favourites to win this match.