Can the Oryx and Riders avenge their defeat from the league stage and make the finals?

After some jaw-dropping encounters in the league stage, the Qatar T10 League is set for the semi-finals on Sunday, December 15. The first of the doubleheader will be played between the Falcon Hunters and Desert Riders. In the first round, the Hunters beat the Riders by six wickets, chasing down 90 with 11 balls to spare. However, the knock-out game could be a different ballgame.

The Falcons finished second while the Riders ended third on the points table. In the second semi-final, table-toppers Swift Gladiators and the Flying Oryx are set to cross swords. It was only on Saturday when the two teams met where the Gladiators won by a massive margin of 27 runs. For the Oryx, they are on a three-match losing streak and can’t afford any sort of blemish in the encounter.

The pitch at the West End Park International Cricket Stadium in Doha has been fairly good for batting. Scores in excess of 90 has been the norm and bowlers have been taken to the cleaners. The semis aren’t expected to be any different by any means. There are chance of rain with clouds hovering over throughout. The temperature will be around the 22 degrees Celsius.

Salman Butt and Mohammad Rizlan have been leading the run-charts for the Hunters. Butt and Rizlan have 119 and 131 runs respectively. Kamran Khan and Hashim Amla have looked decent, but needs to be more consistent. Amad Butt, Iqbal Hussain and Saad Bin Zafar have five wickets each. The likes of Waqas Maqsood, Murad Khan and Tamoor Sajjad have lent good enough support.

Muhammad Tanveer and Adnan Mirza have 106 and 100 runs respectively. It goes without saying that the duo can’t afford to drop their guard. Mohammad Hafeez hasn’t completely flattered to deceive. He also has four wickets in his kitty. Speedster Sohail Tanvir is the Riders’ leading wicket-taker with five scalps. The rest of the bowlers haven’t quite been up to the mark. 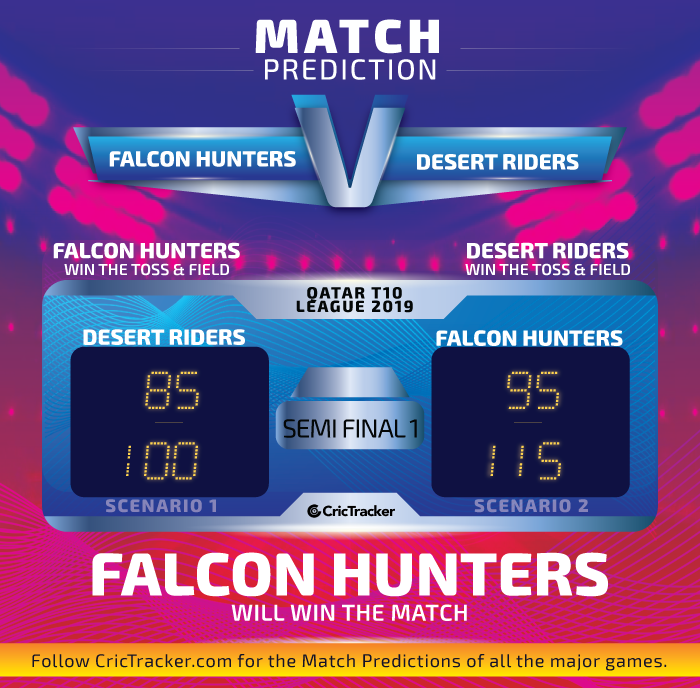 Zaheer Ibrahim and Kamran Akmal with 111 and 110 runs respectively have stepped up at the top of the order. Ravinderpal Singh and Ali Imran have contributed with runs in the 80s. In the bowling department, Mughees Bajwa has eight wickets and has gotten support from Zain Uddin and Ali Imran with six wickets each. A lot will also be expected of veteran fast bowler Umar Gul.

Hussain Talat is the Oryx’s leading run-getter with 82 runs, but the rest of the batters haven’t come to the party. The strike-rates have also been on the lower side. In bowling, Naved Malik has five wickets, but at an economy of 11.80. The others haven’t been up to the mark. Talat and Harmandeep Singh have good economies and it’s time for them to contribute with wickets.

The prediction is for Swift Gallopers to win the match. 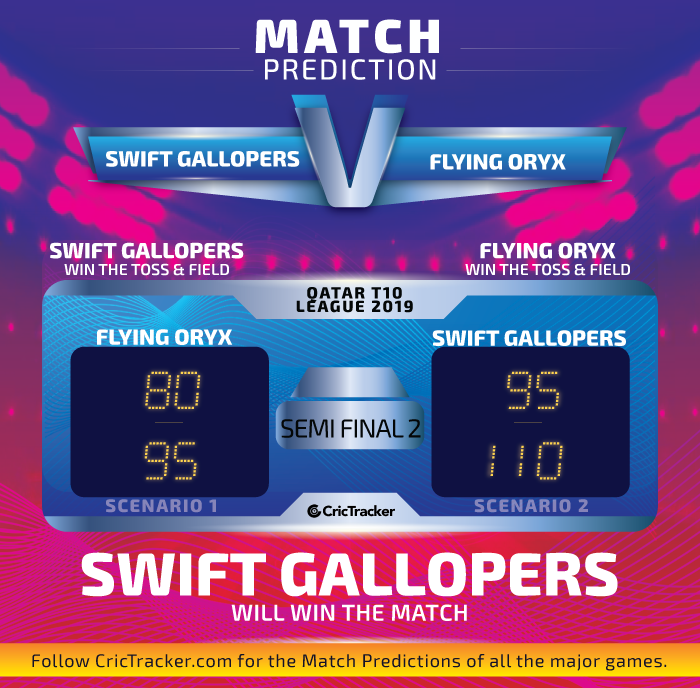