Charles Perchard is expected to feature in the 2nd T20I having missed the first match.

The 2nd game of the 3-match T20I series between Qatar and Jersey will be played at the West End Park International Cricket Stadium in Doha.

This game can be viewed on the YouTube channel of Qatar Cricket.

Jersey’s tour of Qatar didn’t start as to how they would have anticipated as the home team took 1-0 lead in the 3-match T20I series that began on Wednesday. It seems as if the Jersey team decided to treat this series as a warm-up for the Men’s T20 World Cup 2020 Qualifiers which will be starting next week in UAE. The Jersey team rested their regular captain Charles Perchard in this process.

After losing the toss, Qatar posted 179/4 in their 20 overs as opener Faisal Javed scored a 31-ball 61 with 10 boundaries. Three other batsmen scoring 25+ helped the hosts to post a big score. Jersey’s top four got starts but all score well below the required rate. Jersey were only 71/3 by 12th over of the chase. They batted did well to score 88 more runs but it wasn’t enough to win the match.

Bright and sunny weather is expected for the 2nd T20I which will be played in the evening. The temperatures will be high during the evening time and hence teams would prefer to chase.

The game on Wednesday was the first time a team won while batting first at the West End Park. The venue has been a high-scoring thus with an average score of 162. It has witnessed a successful 200+ chase as well. We might witness another 170+ total during the 2nd game which can be chased down this time.

Nouman Sarwar didn’t get a chance to bat in the first game. But he averages 57.33 with the bat in this format having scored 172 runs from 9 innings. The two wickets in that game extended his wickets tally to 14 from 11 innings. Dominic Blampied has a similar record in the T20Is but got only one ball to face. Muhammad Tanveer didn’t do that great with the bat in the previous game but has scored three fifties from 13 T20I innings for Qatar. Harrison Carlyon will be crucial if he is named in the playing XI.

Nouman Sarwar will a safe option as captain or vice-captain due to his all-round consistency in the T20Is. 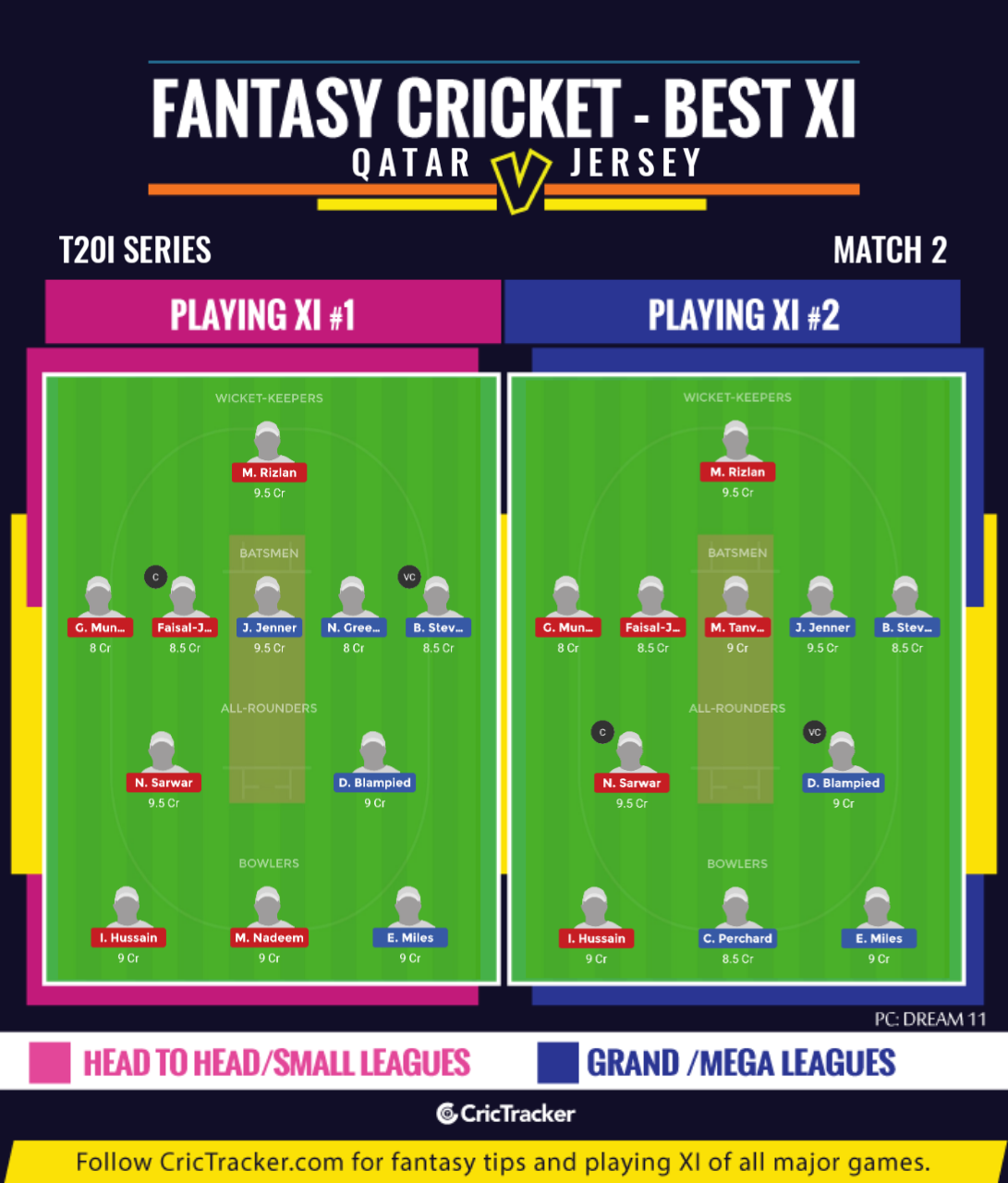 Harrison Carlyon and Charles Perchard didn’t play the first game but are expected to return for the 2nd T20I. Perchard was missed with the ball as Qatar scored at least 15 runs more than what was expected. Carlyon’s absence meant Jersey didn’t get a quick start in the run-chase.

Jersey is expected to level the series with a comfortable win over Qatar.