It's a must-win match for Karachi Kings to stay in the contest. 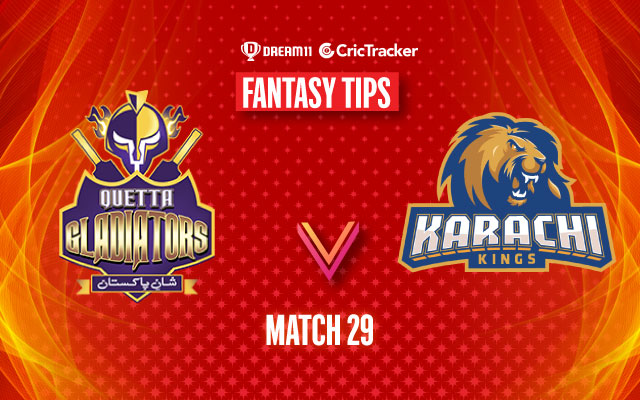 PSL 2021 won’t be remembered by Quetta Gladiators for too long as they will finish the tournament at the bottom of the table. They have managed to only 2 out of their 9 matches played. Sarfaraz Ahmed’s men suffered a massive defeat of 110 runs in their last match against Multan Sultans. Now, they will look to end their tournament on a positive note.

Karachi Kings kept their playoff chances alive with a win over Lahore Qalandars by 7 runs on Thursday. This is a must-win game for them and they need to win this match by a massive margin to give themselves a chance. At present, they are at the 5th spot in the standings with 8 points.

Huge scores have been scored in the last 3 matches by the team batting first. The surface is expected to offer plenty of support to the batters in this match as well.

Jake Weatherald is doing quite well so far in this competition. He has managed to score 123 runs in 4 matches at an average of 30.75 with the highest score of 48.

Babar Azam scored his 6th half-century of the tournament against Lahore Qalandars in the last game. He is the leading run-scorer in this competition with 478 runs in 9 matches.

Mohammad Nawaz is the go-to go bowler for skipper Sarfaraz Ahmed. He has scalped 6 wickets in 9 matches at an economy of 7.5, and with the bat, he has scored 109 runs at an average of 15.57.

Imad Wasim doesn’t give too much room for the batters to score runs. Karachi Kings skipper has picked up 7 wickets and scored 49 runs so far in this tournament.

Mohammad Hasnain is an upcoming prospect for Pakistan. He is the leading wicket-taker for Quetta Gladiators in this tournament, with 9 wickets in 9 matches at an economy of 8.89.

Noor Ahmad was the player of the match in the last game against Lahore Qalandars, where he picked up 2 wickets by conceding just 19 runs in his 4 overs.

Sarfaraz Ahmed has scored the most runs for Quetta Gladiators in this year’s league. He has accumulated 270 runs in 9 matches at an average of 38.57, with the highest score of 81.

QUE vs KAR Must Picks for Dream11 Fantasy Cricket:

Azam Khan is a talented cricketer but has managed to score only 159 runs in this tournament. Considering his decent performances, he is a risky captaincy pick.

Najibullah-Zadran has scored 99 runs in 4 matches so far in this league. You can take a risk by picking as your fantasy team skipper.

Chadwick Walton has been inconsistent with his performances. He has scored only 46 runs in the last 4 matches and hence you can avoid him while making your fantasy teams.