Bot the teams are languishing at the bottom half of the points.

Multan Sultans topped the group stage in the 2020 edition of the Pakistan Super League (PSL). However, this time around, the team, captained by Mohammad Rizwan, is yet to make a mark. Out of their first four games, they lost three and are currently placed at the bottom half of the points table. In their previous game, the Sultans lost to the Karachi Kings by seven wickets, failing to defend 195.

In their next match, they would be up against the Quetta Gladiators on Wednesday, March 3 at the National Stadium in Karachi. The Gladiators, on the other hand, have had their travails in the tournament. Their skipper, Sarfaraz Ahmed, has been seen scratching his head while marshaling his troops. They have to register some wins under their belt in order to climb the ladder in the table.

The pitch in Karachi has been an absolute belter for batting. The bowlers haven’t had room for error by any stretch of the imagination. Another high-scoring match seems to be in the offing under the lights. The temperature will be around 25 degrees Celsius with the humidity mostly in the 10s.

Playing Combinations for QUE vs MUL

Faf du Plessis is a seasoned campaigner with the bat in hand, having played in various T20 tournaments around the world. He has joined the Gladiators squad as a replacement for Chris Gayle. In the first very first game, he gave an account of himself, though his team couldn’t win the match.

Mohammad Rizwan has been outstanding for the Sultans in the tournament. In four matches, he has scored 231 runs at an average and strike-rate of 57.75 and 142.59 respectively. The right-hander has two fifties with a top score of 76. If he gets going then the Gladiators could end up chasing leather.

QUE vs MUL Head to Head 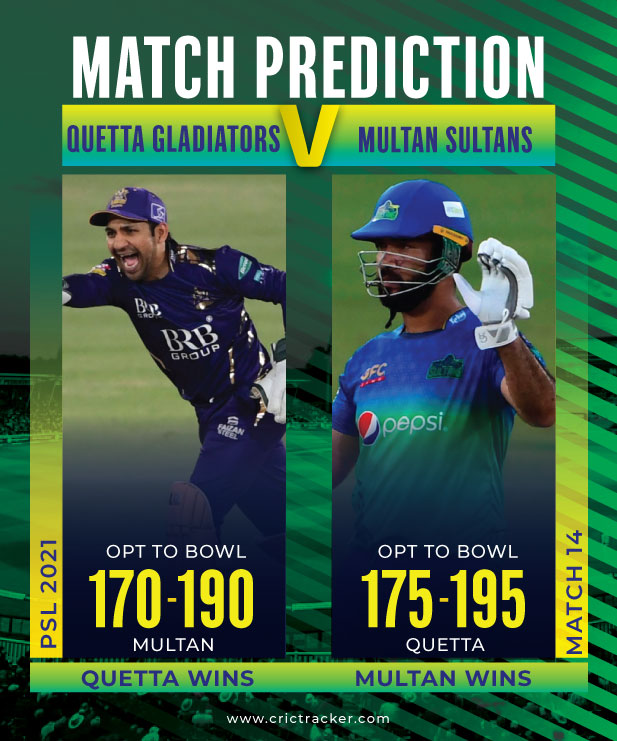