Quiz: How well did you follow New Zealand in Test cricket?

Quiz: How well did you follow New Zealand in Test cricket?

New Zealand became only the 5th team to play Test cricket when they debuted in 1930 by facing England at Lancaster Park in Christchurch. 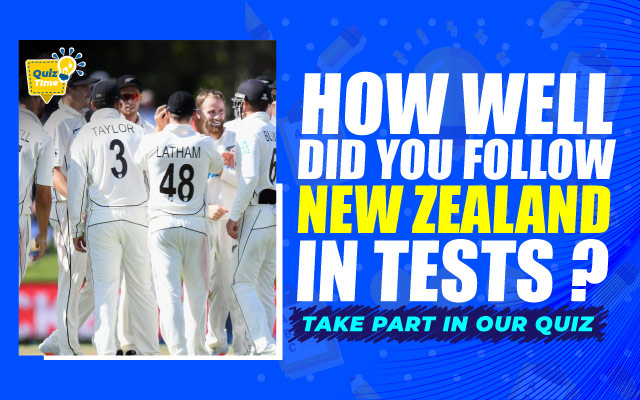 It took a while for New Zealand to get going in the longer format and in a similar way, they took as many as 90 years to reach the top of the team rankings in Test cricket. New Zealand became only the 5th team to play Test cricket when they debuted in 1930 by facing England at Lancaster Park in Christchurch. The game didn’t go well for the Kiwis who lost it by 8 wickets as they got bowled out for 112 and 131 respectively.

The Blackcaps had to wait 26 years for their maiden Test victory as their wait came to an end in 1956 when they beat West Indies by 190 runs at the Auckland’s Eden Park. This victory came a year after New Zealand rolled out for 26 runs against England at the same venue. New Zealand’s total of 26 is till date the lowest in the history of Test cricket and the only all-out total under 30. New Zealand, meanwhile continued their wait for their maiden Test series win until 1970, almost 40 years from their debut.

In those four decades, the Kiwis had seen many embarrassments, defeats and struggles. Some of their top cricketers had to retire without even been part of a Test victory in those periods. Things seemed to have changed with the arrival of Sir Richard Hadlee whose all-round performance helped New Zealand to see great success. Hadlee often brought his best while facing Australia which is why the Kiwis defeat the Aussies quite often during his tenure.

If we exclude Hadlee from New Zealand’s Test history, their success and impact in the format look pale until the start of the 2010s. The entry of Kane Williamson backed by the likes of Ross Taylor, Tim Southee, Trent Boult and Neil Wagner changed the perception over the Kiwis in Test cricket. Under Williamson, New Zealand strengthened their performances at home and have been unbeaten for nearly four years. Currently, New Zealand is on their longest winning streak in Test cricket of six matches.