It’s time to check out your knowledge in this quiz based on the T20 World Cup 2021. 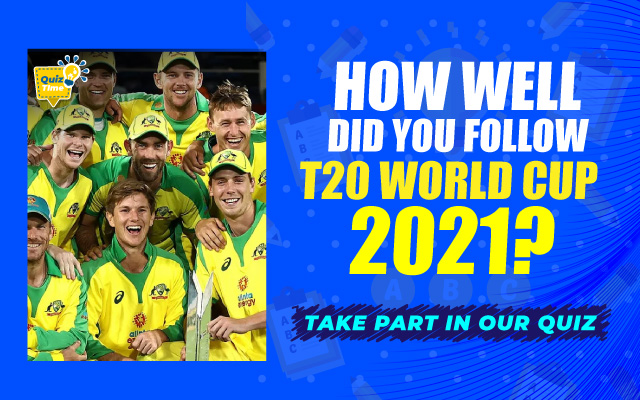 The 2021 edition of the T20 World Cup recently ended with Australia lifting the prestigious title for the very first time. It was indeed a fascinating tournament as some exciting contest was witnessed between the bat and the ball. Also, it was the first ICC tournament after the COVID-19 came into the picture. Hence, players had to tackle several different challenges during the course of the competition.

Speaking of how the tournament panned out, 16 teams took part out of which the top eight were directly awarded a place in the Super 12 stage while the remaining eight teams had to battle it out in a preliminary round with four places in the next stage at stake. Sri Lanka, Bangladesh, Namibia, and Scotland were the teams to qualify for the main round.

The Super 12 stage saw many uncertain games as defending champions West Indies won just one of their five games and subsequently, got knocked out of the competition. India were the other side which shocked fans with their failure. Despite having stalwarts like Virat Kohli, Rohit Sharma, and Jasprit Bumrah, the Indian side couldn’t even clear the league stage.

Meanwhile, the four teams to qualify for the knock-out round were England, Australia, New Zealand, and Pakistan. While England meet the Kiwis in the semi-finals, Australia were up against Babar Azam’s Pakistan. Interestingly, both Australia and New Zealand were the dark horses of their respective semi-final fixtures as an England vs Pakistan summit clash seemed a certainty.

However, the saying goes: ‘the only thing certain in cricket is certainty.’ Hence, the Aussies and the Kiwis emerged victoriously and a Trans-Tasman battle was on display on the night of the finals. Interestingly, Australia donned the Yellow jersey which they sport in ODIs instead of the dark green kit which they used throughout the global event.

They indeed played like the vintage Australian team as the Kane Williamson-led side looked on the backfoot despite posting a challenging 172/4 while batting first at the Dubai International Cricket Stadium, Dubai. However, blistering half-centuries from David Warner and Mitchell Marsh helped the Aussies cross the line in 18.5 overs, clinching the game by eight wickets.

All in all, the seventh edition of the T20 World Cup had many memorable moments which will remain forever in the memory of fans. While there were some shocking failures, several players and teams also exceeded expectations.

Now it’s time to check out your knowledge in this quiz based on the T20 World Cup 2021. Use your knowledge and memory and see if you can score 10/10 in this intriguing challenge.