Quiz: How well have you followed the first half of IPL 2020?

Quiz: How well have you followed the first half of IPL 2020?

Test your knowledge if you have followed the first half of IPL 2020. 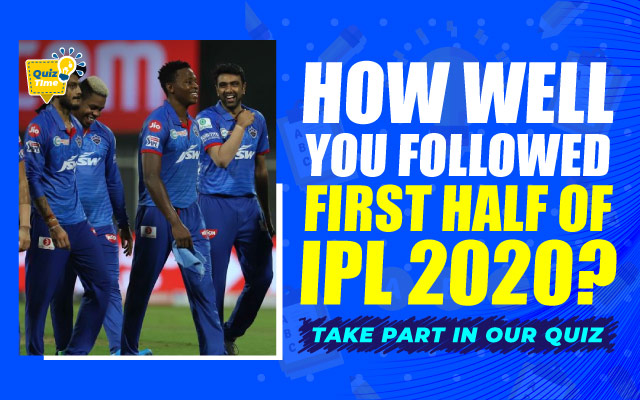 The 2020 Indian Premier League (IPL) has been the closely contested edition in the league history with a lot of matches going down the wire and also into Super Over. The first four weeks of the tournament have witnessed quite a lot of thrilling matches played across three venues; all of them with different playing conditions. The Sharjah Stadium was one of the shortest venues ever to host the T20 format and the batting paradise here in initial matches helped the batters record huge totals.

The venue even witnessed the highest ever chase in the IPL history but tracks here slowed down a bit. Abu Dhabi, which hosted the tournament opener, has been on the slower side and has been favourable for both batsmen and bowlers. Dubai Sports City Stadium has been the venue for Tied matches in the tournament. As many as three of the four Tied fixtures of IPL 2020 were hosted by Dubai including the double Super Over during the game between Mumbai Indians and Kings XI Punjab.

The Dubai ground has got huge boundaries but the batsmen have not shied away from making the ball reach the stands. Irrespective of the big boundaries and dry tracks in Dubai, the venue witnessed unbelievable hitting by some of the batters. The KXIP skipper KL Rahul was seen smashing quite a few records at the venue where he smashed an unbeaten 132 against his former team Royal Challengers Bangalore. Rahul’s inning was the highest by a wicketkeeper, by a captain and also by an Indian in the history of IPL.

Going into the tournament, the hype around the spin bowlers was quite high but the pace bowlers dominated through the first half. The likes of Anrich Nortje and Kagiso Rabada put Delhi Capitals on the top with their pace. Nortje, especially, went down in IPL record books for his fierce pace. The trio of Jasprit Bumrah, Trent Boult and James Pattinson kept Mumbai Indians alive in their defence of the IPL title. [All the questions asked in the quiz below are until Match No.36 of the tournament]

Test out your luck of following the first half of the tournament!