Uttar Pradesh will start as the favourites against Saurashtra due to the home advantage.

Uttar Pradesh made it to the knockouts of the Ranji Trophy for the first time in five seasons with consistent performances in Group C. They finished second in the points table with five outright wins from nine matches. UP exceeded expectations under the young Akshdeep Nath having finished in the bottom half in the last four editions of the tournament. Saurabh Kumar was team’s star performer claiming 50 wickets at an average 15.54.

The likes of Rinku Singh, Akshdeep and Priyam Garg’s consistent scores with the bat helped the team’s success. The home advantage has helped their bowlers maintain impressive averages. Saurashtra, on the other hand, finished 2nd in Elite Group A and B with help of three outright wins. The Jaydev Unadkat ked team too has a good set of performing bowlers. Dharmendrasinh Jadeja has been impressive with 38 wickets and also 220 runs with the bat.

The 2nd Quarter-Final game of the Ranji Trophy 2018-19 will be played between Uttar Pradesh and Saurashtra at the Bharat Ratna Shri Atal Bihari Vajpayee International Cricket Stadium in Lucknow.

The Atal Bihari Vajpayee Stadium aka Ekana Stadium has produced extreme tracks in its short 3-year span. The UP vs Railways match in the previous season witnessed 19 wickets via LBW as the pacers did most of the damage. It also produced a couple of rank-turners in the other fixtures. The pacers had a touch better success compared to the spinners from the two matches played at this venue in the current season.

Uttar Pradesh finished 2nd in the Elite Group C with 41 points from five outright wins and four draws from 9 matches they played.

Saurashtra finished 2nd in the Elite Group A and B with 28 points coming from three outright wins and five draws from 8 matches.

Cheteshwar Pujara is available to play the Ranji Trophy knockouts for Saurashtra.

Rinku Singh of Uttar Pradesh has been impressive with the bat in his short 18-match first-class career. He scored 1495 runs at an average of 71.19 with four centuries and eight fifties. This season has been even better for the middle-order bat as he is the leading run-getter for Uttar Pradesh this season. Rinku aggregated 803 runs from 11 innings with a Bradmanesque average of 114.71. He has scored three centuries and three fifties with the lowest dismissed score being 31. His three tons read: 149, 149* and 163*.

After a sensational tour of Australia, Pujara will be eager to make his red-hot form count in the domestic circuit. UP’s left-arm spinner Saurabh Kumar and Pujara have to be the first preferred names for captain’s role. Saurabh has clinched 50 wickets this season so far. Rinku and Unadkat can be your pick as vice-captain. 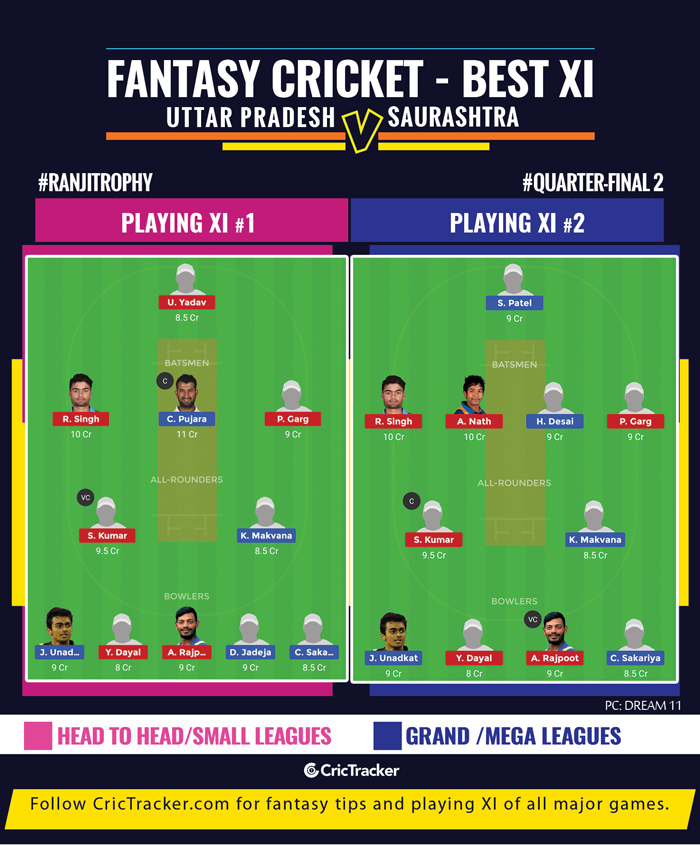 Due to the high price tags for players on both sides, Akshdeep Nath has been excluded while taking Pujara. The UP skipper is valued at 10 credits while Pujara comes at 11 credits. Only two among Pujara, Akshdeep and Rinku can be in your team among the high priced players from all-rounder and bowlers’ categories.

Uttar Pradesh will start as the favourites against Saurashtra due to the home advantage.