Roosh Kalaria scored 118 in the quarter-final and backed it up with 3 wickets. Picking him as captain can reap you great rewards.

The 1st semi-final of 2019-20 Ranji Trophy will be played between Saurashtra and Gujarat at the Saurashtra Cricket Association Stadium in Rajkot.

The match starts at 09:30 AM local time (04:00 AM GMT). This match will be live on Star Sports 3. Live Streaming will be available on Hotstar.

So, this is it then! After two and a half months of 38 teams producing pulsating First-Class four-day cricket across the length and breadth of the country, we are finally down to the top-4 sides vying to seal their spot for the summit clash.

The first semi-final will see past edition runners-up Saurashtra lock horns with Gujarat in Rajkot. Gujarat comes into this all-important semi-final after having notched up a whopping 464 runs thanks to twin hundreds from skipper Parthiv Patel [124] and Roosh Kalaria [118*] and all-round bowling performances- led by Chintan Gaja [5-19] and Lakshay Garg’s four-wicket-haul in the first and second innings respectively.

But their task wouldn’t be as easy- especially for their bowlers- on a flat track in Rajkot and against a side, which thrives in playing on such wickets. Saurashtra will come into this game on the back of a draw in the quarter-finals against Andhra after Chirag Jaini’s 121 and half-centuries from Vishavraj Jadeja [73], Sheldon Jackson [50] and Prerak Mankad [80] helped them gain a first-innings lead.

The Decision Review System [DRS] will also be available in the semi-finals but its prime components- Hawk-Eye and Ultra-Edge- will not be available.

We are in for pristine weather conditions in Rajkot in the next few days. While the first day is predicted to be partly cloudy, the following days will see bright sunshine. While the temperatures are set to fluctuate between 18-34 degrees celsius, the humidity will hover around 20%. Chance of rain: 10℅.

The fact that three of the four games played in Rajkot this season have ended in high-scoring draws, one doesn’t have to be a scientist to conclude that another flat track awaits both sides in the semi-final.

Saurashtra- The 2018-19 runners-up will bank on the likes of Sheldon Jackson [680 runs at 52.3], Arpit Vasavada [515 runs at 51.5], Harvik Desai [503 runs at 33.5] to lead their batting unit. On the bowling front, Jaydev Unadkat- the only bowler to take 50+ wickets in the ongoing season- will once again lead the attack and he’ll hope that the likes of Dharmendrasinh Jadeja [26 wickets] and Chirag Jaini to rise to the occasion. 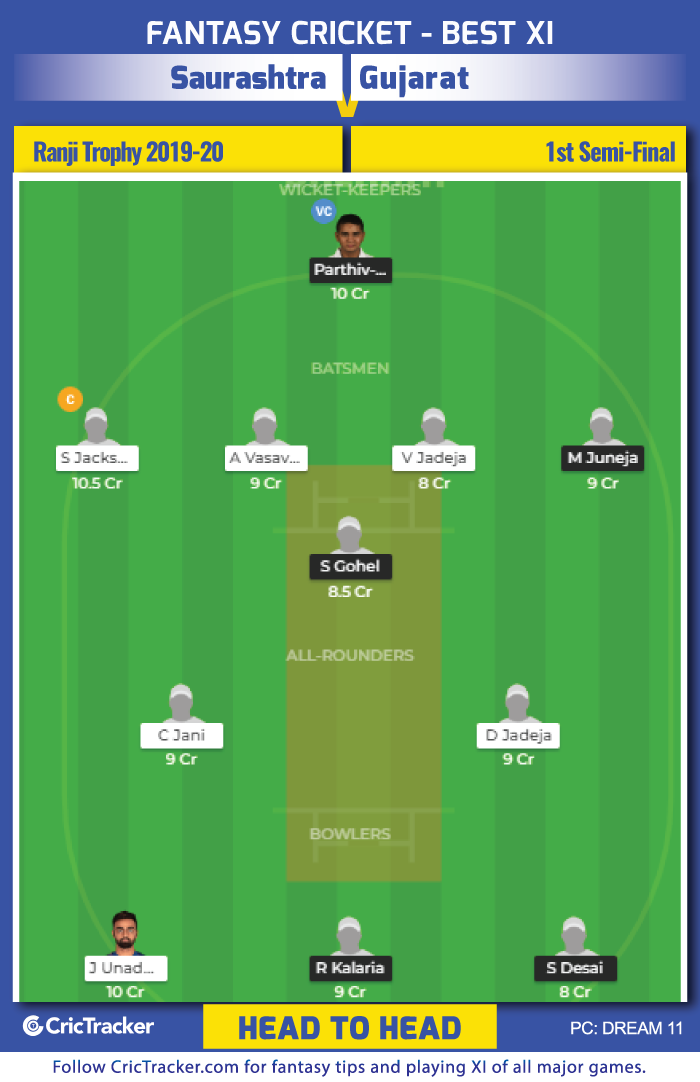 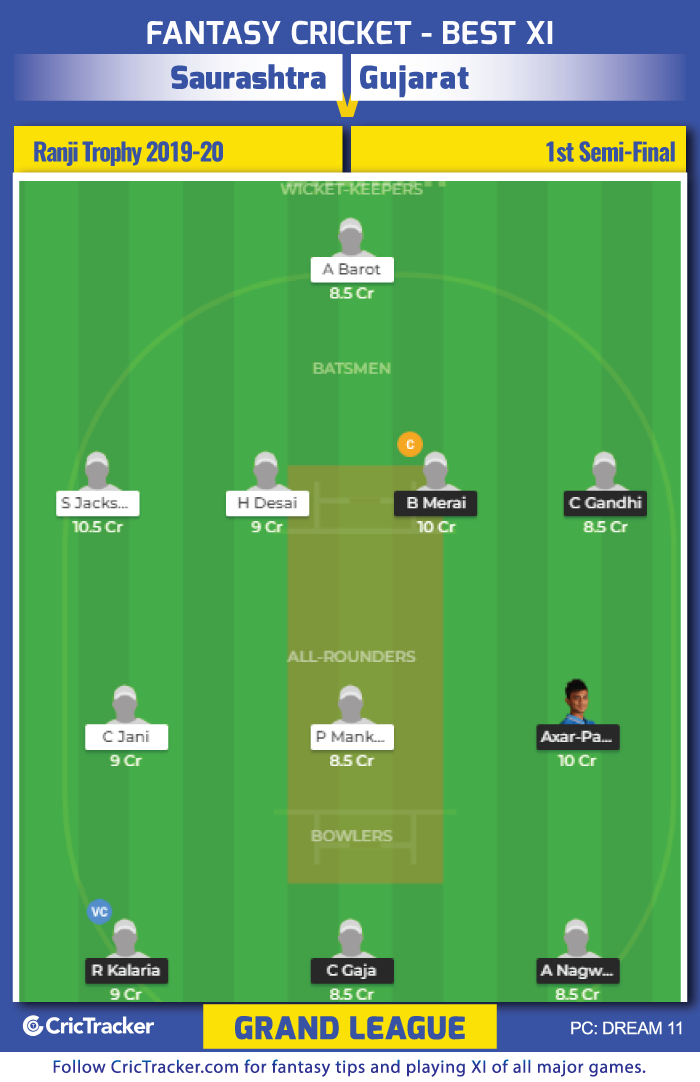 With Rajkot expected to dish out a flat track, opting for more batsmen and even making them captain/vice-captain will be an ideal punt.

Roosh Kalaria scored 118 in the quarter-final and backed it up with 3 wickets. Picking him as captain can reap you great rewards.

Saurashtra is expected to come out as the winners.