Mayank Agarwal returns to Karnataka squad after being part of the Indian ODI squad.

The Round 3 match in the Elite Group B of the Ranji Trophy 2019-20 will be played between Karnataka and Himachal at the Srikantadatta Narasimha Raja Wadiyar Ground in Mysore.

After winning the Vijay Hazare Trophy and Syed Mushtaq Ali T20, the Karnataka team started the season with a close win against Tamil Nadu. They followed with a draw against Uttar Pradesh in the first home match where they took the first-innings lead. Karnataka will now host Himachal in the 3rd round game. The return of Mayank Agarwal will bolster the Karnataka in this match. The Himachal team began the season with a tough 5-wicket defeat against Himachal in a low-scoring match. They got better of Tamil Nadu in their 2nd match to open their account in another low-scoring thriller.

Mysore is expected to be under clouds across the four days of this match but no rain is expected on the first two days. There is a slight possibility of rain on the last two day’s play but after 2 PM.

The SNRW Ground in Mysore is expected to be on the slower side during the game between Karnataka and Himachal. The venue produces high scores during the T20 matches but in the longer format, the track has all three variations seen in a typical sub-continent track. If the pitch crumbles enough before the final day’s play, we could witness an outright result.

Mayank Agarwal returns to Karnataka squad after being part of the Indian ODI squad.

Mayank Agarwal got hundreds all the three times when he went past 50 in first-class matches in the 2019/20. In two instances, he ended up scoring a double hundred. Shreyas Gopal could be a valuable addition in the fantasy team on a slow Mysore track. He can be seen scoring crucial runs down the order and pick wickets at regular intervals. Skipper Ankit Kalsi scored only 30 runs in four innings this season thus far. However, in 2018/19 Ranji Trophy, he scored 511 runs at an average of 85.16 across 7 innings. He scored three of the four individual hundreds recorded for Himachal during the season. Mayank Dagar claimed 24 wickets in 8 matches in the 2018/19 Ranji Trophy and also scored 284 runs with two fifties. 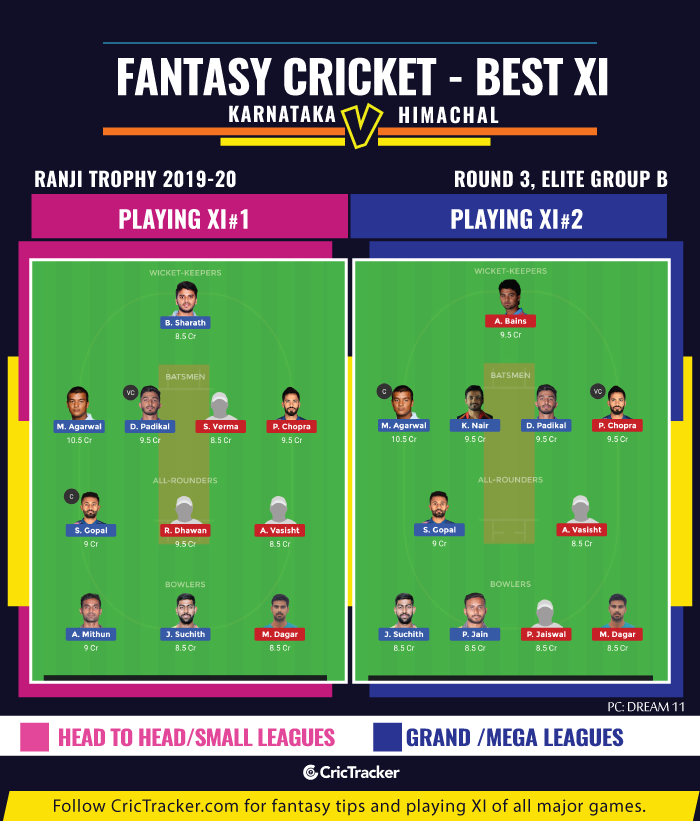 Karnataka is expected to earn at least three points from this game. They register an outright win if the pitch is good enough to produce a result.