The Challengers dominated the Super Kings the last time they met in Dubai.

The Royal Challengers Bangalore (RCB) are currently placed third on the points table in the ongoing edition of the Indian Premier League (IPL). The team, led by Virat Kohli, have won seven out of their first 10 matches and are looking in excellent rhythm.

In their previous game against the Kolkata Knight Riders (KKR), they came out trumps by eight wickets at the Sheikh Zayed Stadium. They will next be facing the Chennai Super Kings (CSK) on Sunday, October 25 at the Dubai International Cricket Stadium.

In their last meeting, the Challengers got over the line on the back of Kohli’s unbeaten 90 backed up with some excellent bowling. As far as CSK are concerned, their campaign seems to be in the tatters.

The pitch in Dubai has been a decent one for batting with nothing much for the bowlers. However, from the last few games, even the bowlers, especially the spinners, have started to get assistance from the surface.

In the last few games, teams batting second have tasted a great amount of success, and hence, chasing should be the way forward. The temperature will be around 35 degrees Celsius.

Playing Combinations for RCB vs CSK

Virat Kohli started the 2020 IPL on the back of a few lacklustre knocks. In three games, he managed only 16 runs and was looking completely out of sorts, but he has found back his form, much to RCB’s relief.

The veteran is pretty much aware of CSK’s bowling setup, having already played a match-winning had against them at the same venue. It remains to be seen how he does next time around.

Faf du Plessis has arguably been the standout batter for the Super Kings in the cash-rich T20 extravaganza. Even as other CSK batters haven’t been consistent, the former South African skipper has continued to step up and deliver.

Needless to say that he needs to be on top of his game in the remaining matches for the Super Kings. In 10 matches, Faf has 375 runs at an average of 46.87.

RCB vs CSK Head to Head

The prediction is for Royal Challengers Bangalore to win the match. 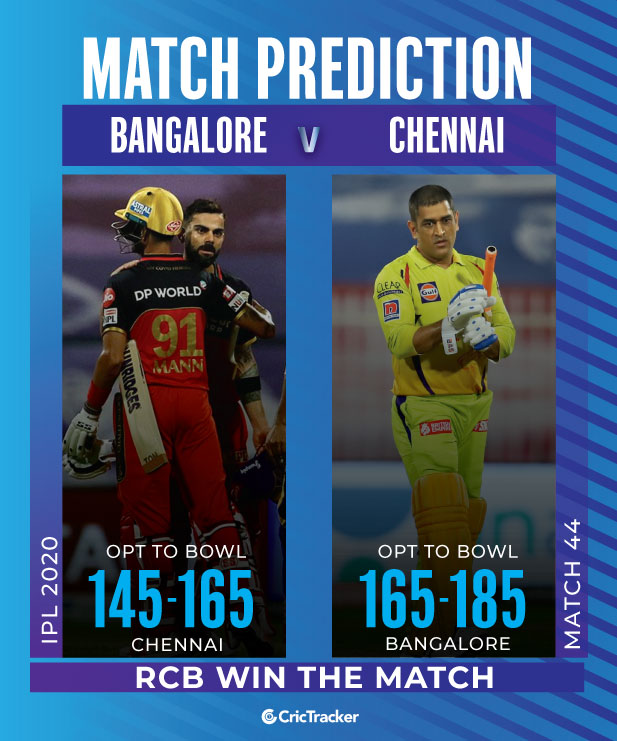