Since 2016, MI have beaten RCB in seven out of eight matches.

Royal Challengers Bangalore (RCB) made a dream start to the 2020 Indian Premier League (IPL) with a victory over Sunrisers Hyderabad (SRH). However, Virat Kohli and Co got a reality check after Kings XI Punjab (KXIP) thrashed them by a huge 97 runs in Dubai.

The defeat pushed them to the seventh position in the points table and also dented their net run rate, which is currently at a dismal -2.175. Their next match is against Mumbai Indians (MI) on Monday, September 28 in Dubai itself.

MI lost their opening game against Chennai Super Kings (CSK), but came back with a 49-run victory over the Kolkata Knight Riders (KKR). Going into the next game, MI can be deemed as the favourites as Rohit Sharma and Co have beaten RCB in seven out of the last eight matches since the year 2016.

The pitch in Dubai has favoured the team, batting first and the chasing teams have found it tough to get things going. The track has helped the batters to some extent and also has had something, both for the spinners and fast bowlers.

The conditions are expected to be warm with the temperature around the 34 degrees Celsius mark. The humidity will be extreme with the numbers mostly in the 50s.

Playing Combinations for RCB vs MI

AB de Villiers thrives against the Mumbai bowling attack. He has been in decent form in this IPL and will be looking to keep going his rhythm. From 21 matches versus MI, the former South African has 656 runs at an average and strike-rate of 43.73 and 142.30 respectively. He has three fifties and a century and the MI bowlers will want to see his back at the earliest to keep the RCB batting quiet.

Jasprit Bumrah, out of his 85 IPL wickets, has 16 wickets against the Bangalore-based franchise. He scalped them in 13 matches, bowling 50 overs. He has an impressive economy of 7.64 with best figures of 3/20. He has bowled with venom thus far in the tournament and he will play a crucial role even next time around. His strike-rate of 18.75 is also the best amongst the teams in the IPL.

RCB vs MI Head to Head 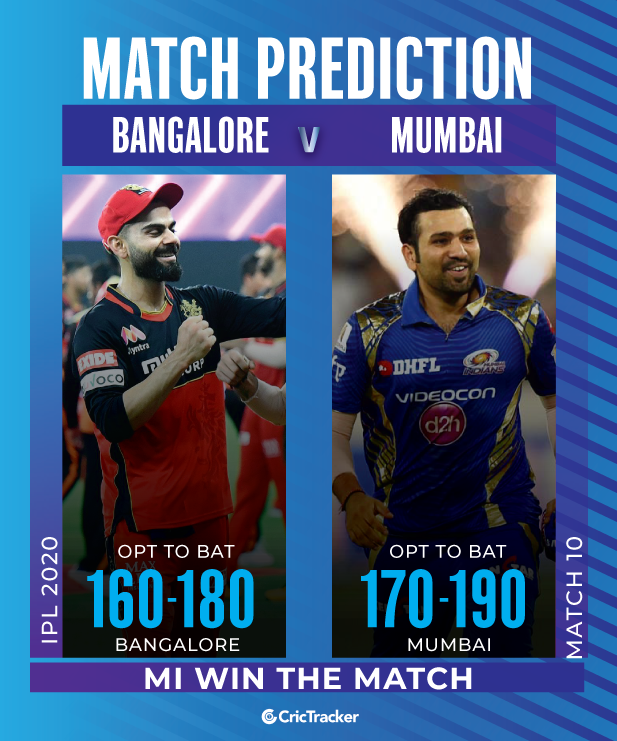