In their previous meeting, the Heat got the better of the Renegades.

The Melbourne Renegades have already been knocked out of the ongoing edition of the Big Bash League. Having won three out of 12 matches, Aaron Finch and Co have no chance of making it to the next round. However, the fact that they beat the Melbourne Stars by five wickets at the Docklands Stadium should give them some confidence.

In their last two games, they would try to be party-spoilers. Their next match is against the Brisbane Heat on Saturday, January 23 at the Docklands Stadium in Melbourne. On head-to-head count, the Renegades are leading the Heat by 10-4.

But in their previous meeting this season, the Heat won by five wickets. The next game is an important one for the Heat as a loss could see them getting knocked out of the tournament with one game remaining.

The pitch at the Docklands Stadium has been fairly good for batting. There haven’t been many demons on the track. The pitch isn’t expected to change much either for the next match and hence, chasing should be the way forward. The sun will be out during match time and the temperature would be around the 22 degrees Celsius mark. The humidity will mostly in the mid-50s mark.

Playing Combinations for REN vs HEA

Shaun Marsh has been pretty much a lone warrior for the Renegades in the tournament. In 10 matches, the left-handed batsman has scored 272 runs at an average and strike-rate of 27.20 and 132.68 respectively.

He is their top run-scorer with three fifties to his name. However, he hasn’t got any semblance of his support from the others. Marsh can’t afford to drop his guard by any means.

Chris Lynn has looked in excellent touch in the tournament. He missed a few games in between due to injury, but he hasn’t allowed the break to disturb his momentum.

In eight games, the right-hander has scored 317 runs at an average and strike-rate of 39.62 and 149.52 respectively. He has three fifties to his name and Heat would be hoping for their gun batter to fire on all cylinders in the event. 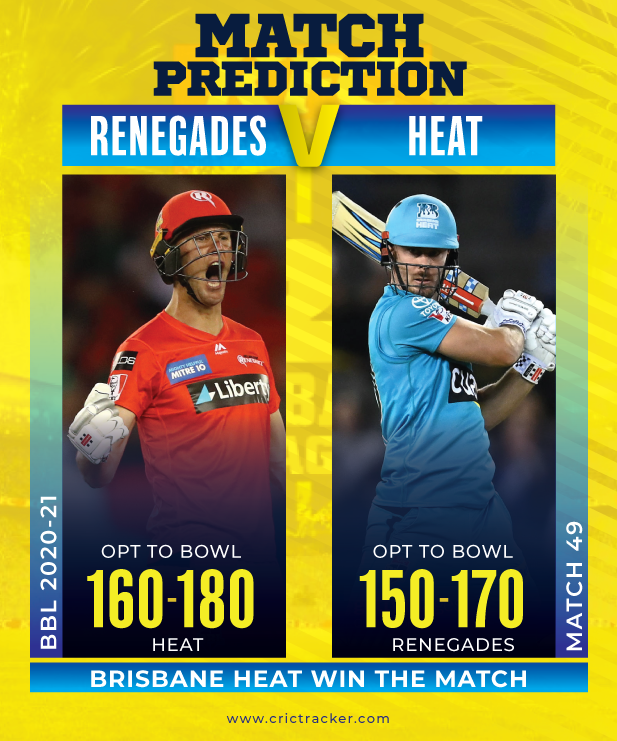