Hampshire will miss the services of James Vince, Aiden Markram and Liam Dawson due to the World Cup.

The South Group teams Hampshire and Somerset made it to the historic Lord’s final to be played on Saturday amidst the commencing of the World Cup warm-up matches. Hampshire finished as table-topper in their group having won seven of the eight matches. The defending champions of the Royal London One-Day Cup will, however, miss the services of their main players – James Vince and Liam Dawson. Both the players were roped into the England squad for the World Cup at the last moment.

Somerset, on the other hand, won five matches in the group stage and edged out Gloucestershire on NRR. They defeated Worcestershire and Nottinghamshire by huge margins of 147 and 115 respectively in the quarters and semi-finals. With all key players available for this fixture, Somerset will be hopeful about recording their first Trophy win at the Lord’s since the Cheltenham and Gloucester final in 2001. However, Hampshire can get a bit of confidence from their victory over Somerset in the group stage.

The Final of the Royal London One-Day Cup 2019 between Hampshire County Cricket and Somerset County Cricket will be played at the Lord’s County Ground.

The previous two Lord’s finals have been high-scoring games and the teams batting first have regularly posted 280+ at the Lord’s in One-Day matches. Both the teams have players who can adapt to the conditions and score quickly resulting in yet another high-scoring match. The spinners could come into play as a considerable amount of turn has been witnessed at this venue in the recent One-Dayers.

James Vince and Liam Dawson miss out from Hampshire’s squad as they are part of the World Cup.

Azhar Ali’s performances haven’t been restricted to batting as the Pakistan player been effective with his leg-spin. He claimed a 5-wicket haul against the Worcestershire in quarters. The Lord’s could produce bit of turn as the game progresses and his bowling could come effective. Roelof van der Merwe too will be important in that case. Craig Overton has 20+ points in all the ten matches he played this season which makes him a safe option for vice-captain. 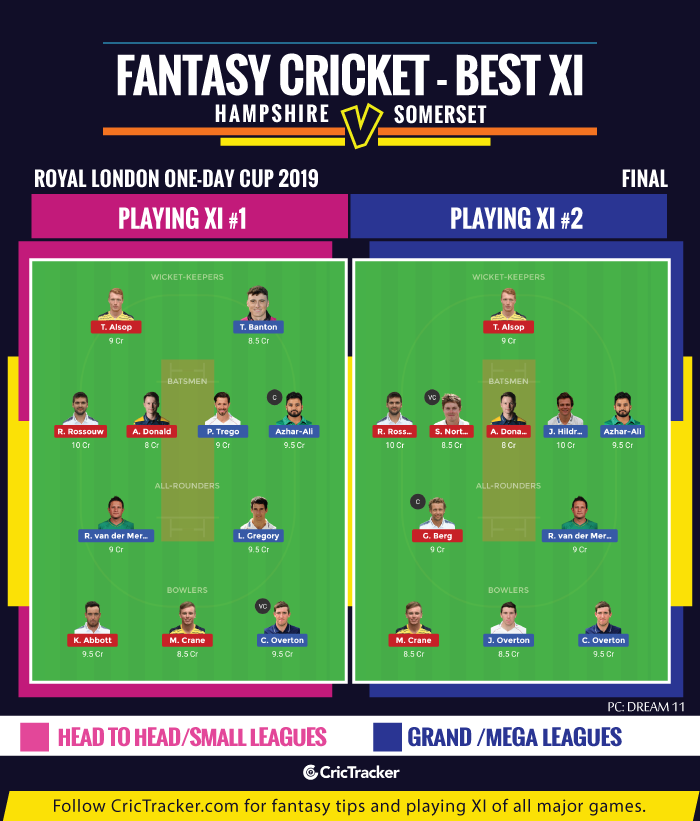 Azhar Ali and Aneurin Donald are the best choices among the batsmen category while the likes of Peter Trego, Rilee Rossouw and James Hildreth can be hit or miss. Sam Northeast’s success depends on the situation and position he bats.

Somerset is expected to end their 18-year wait of a Lord’s final victory as Hampshire misses some key players.