Alex Hales has been added to the Nottinghamshire's squad for the game against Durham.

Nottinghamshire is firmly placed on the top of the North Group having won five of the six matches they played thus far. Another victory in the remaining two matches will seal their place in the semi-final. They will be now up against the Durham team who were victorious in four of the six games. A victory by a decent margin over Nottingham will help Durham to claim the top spot in the points table.

The Durham team are boosted by the inclusion of the speedster Mark Wood while a couple of their batsmen are nursing injuries. On the other hand, the Nottinghamshire will be missing Ben Duckett as the left-hander has International commitments. However, Alex Hales, who has become a hot topic in England cricketing circles over the last one week, has been included in the Nottingham’s squad.

The 2019 Royal London One-Day Cup game between Nottinghamshire CC and Durham CC in the North Group will be played at the Gorse Lane in Grantham.

The Gorse Lane in Grantham will be hosting a List A game for the first time since 2000. The only such fixture at this venue was played between the hosts Lincolnshire and Netherlands way back in May 2000. It will be tough to predict the pitch of this game given the lack of data. However, scores of the Second XI matches and Lincolnshire Premier Trophy matches do drop a hint of a low-scoring game based on the present One-Dayers standard in England.

Ben Duckett is away on International duty while Alex Hales returns to Nottinghamshire’s squad.

The form in this tournament of Joe Clarke and Cameron Bancroft makes them ideal for the multiplier roles. Nottingham skipper Steven Mullaney could be handy on the Grantham pitch with both bat and ball. 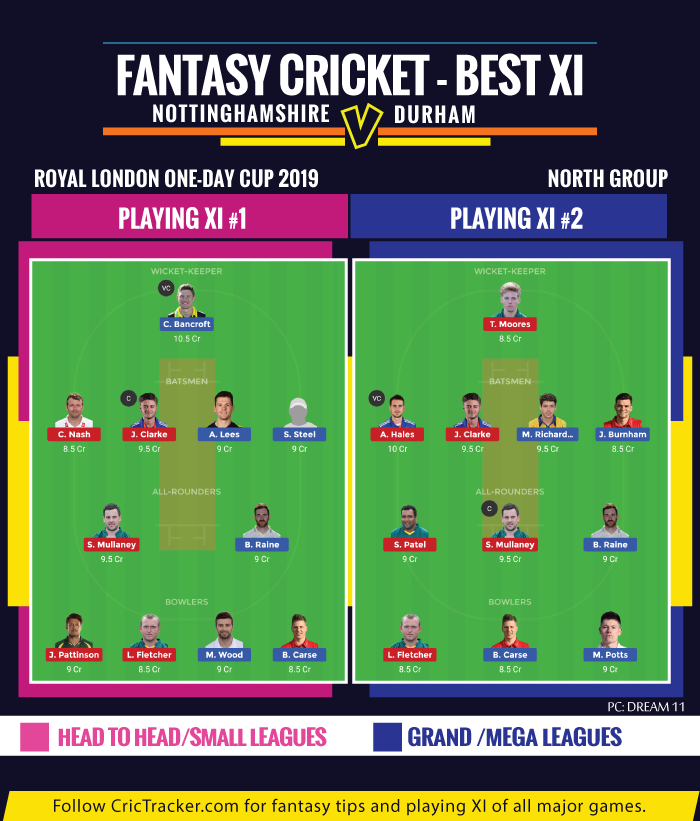 The chances of Alex Hales featuring in the playing XI are not 100% yet. Even if he is named in the XI, taking him in the fantasy XI costs 10 credits. This would result in skipper the best bowlers who are expected to be successful later on.

Nottinghamshire has got an edge with the return of Pattinson and Fletcher to their bowling department.