The 4th match of the SA Quadrangular U19 Series, 2020 will be played between South Africa Under-19s and New Zealand Under-19s at the Chatsworth Stadium in Durban.

This game can be viewed on the Official Cricket South Africa channel on YouTube.

South Africa Under-19s had a tough start to the Quadrangular U19 series as they suffered a 66-run defeat against India Under-19s. Skipper Bryce Parsons’ all-round effort was not enough to help the home team get over the winning line. They will now face New Zealand Under-19s on Sunday. The NZ team won a dramatic match against Zimbabwe Under-19s by 2 runs. The last pair added 52 runs for finishing on 204/9 in that game. Zimbabwe, who a 72-run opening stand in 9 overs, collapsed in the middle overs. The real collapse began when the Saffers were only 8 runs away with five wickets in hand. The Zimbabwe side lost their last five wickets for only five runs.

There is a possibility for rains in the evening at the Chatsworth Stadium on Sunday. However, the match is expected to be completed by that time.

The Durban’s Chatsworth Stadium has often witnessed big scores, unlike the Kingsmead. The average first innings score in the Youth ODIs at this venue reads 246. Such a total is likely to result in wins due to the slowness of the surface as the game progresses. It is one of the reasons why spinners dominated in the second half during the 2007/08 season.

Fergus Lellman good run with the bat in Youth ODIs came to an end when he got out for just 3 runs against Zimbabwe. He will be crucial in improving New Zealand’s chances of finishing with a big total. The NZ skipper Jesse Tashkoff has a good record in Youth ODIs with both bat and ball. He started the tournament with a 3-wicket haul despite scoring only one run. Bryce Parsons showed his all-round ability in the game against India by scoring a 50-ball 57. Earlier, he conceded only 26 runs in the seven overs he bowled and was the team’s most economical bowler. 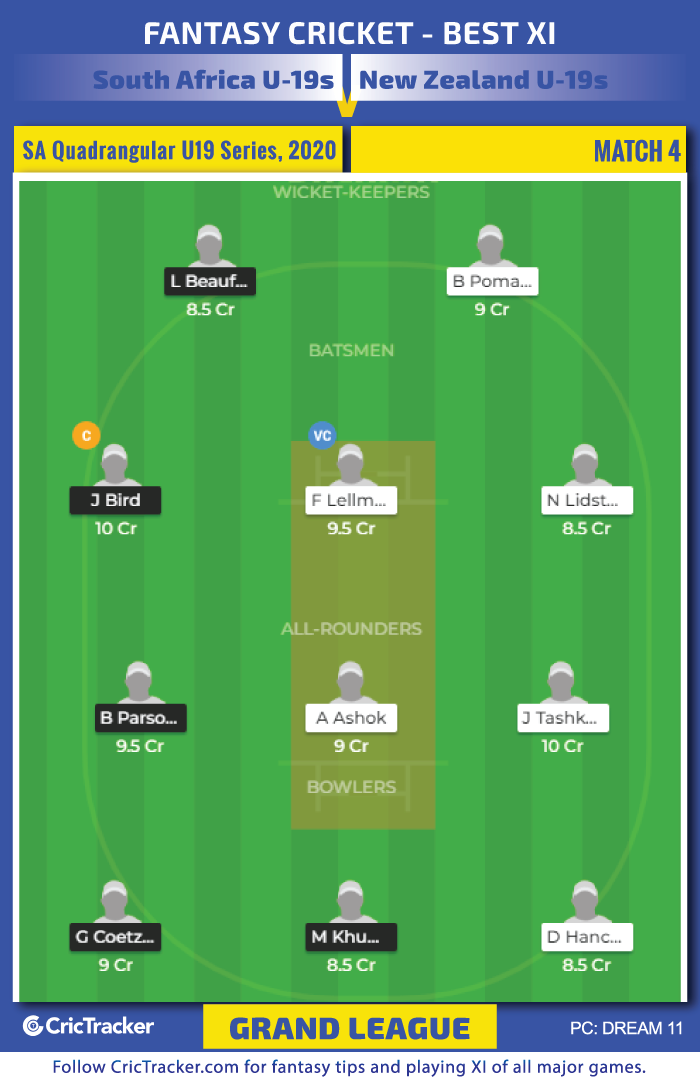 Despite the close win against Zimbabwe, the New Zealand team might not make any big changes as most of their key players didn’t have a great first match. On the other hand, South Africa is expected to make a few changes to their bowling attack as they failed to strike in the middle overs.

South Africa Under-19s are expected to bounce back with their first win.