India U19 will definitely rest some of their main players. Wait for the XIs to be announced before finalising your team.

The 6th match of the SA Quadrangular U19 Series, 2020 will be played between India Under-19s and New Zealand Under-19s at the Chatsworth Stadium in Durban.

India Under-19s have sealed their place in the final of the ongoing Quadrangular series with two dominant victories in as many matches. Divyansh Saxena and the skipper Priyam Garg have scored centuries thus far with Yashasvi Jaiswal smashing 78 runs in the previous game. Even the bowlers are doing their job perfectly as the team looks set to go into the World Cup later in the month full of confidence.

New Zealand colts, on the other hand, won a close game against Zimbabwe U19 by two runs before going down to the hosts, South Africa. The young Kiwis will have to win this game, by a very good margin, to qualify for the final. With South Africa slated to play against Zimbabwe, who have lost both their games so far, New Zealand will also have to take care of their net run-rate to set the final date with India on January 9 at Kingsmead in Durban.

The forecast is not promising in the lead up to this game. The showers are predicted overnight and it will be cloudy during the match as well. There are around 20% chances of rain in the morning and though it will remain cloudy in the afternoon, the chances of heavens opening up decrease.

The surface on offer has been a decent one to bat on at the Chatsworth Stadium in Durban. The teams have been preferring to bat first after winning the toss. But the overhead conditions are likely to play a part in the decision making on Tuesday. The new ball might swing more and the first bowling side will have a chance to make some early inroads.

Average first innings score: 214 (Two matches played at the venue so far in the tournament)

New Zealand U19 skipper Tashkoff should be your top pick for this match as far as the Kiwi colts are concerned. He is a good all-round prospect and has so far picked five wickets. David Hancock has three wickets to his name and he is another decent player. With the bat, not many have been consistent for the BlackCaps. Though Fergus Lellman who came into the tournament with good form should be a good pick.

For India U19, Yashasvi Jaiswal and Divyansh Saxena are a must. Vidyadhar Patil is a good bowler and can pick wickets with the new ball. 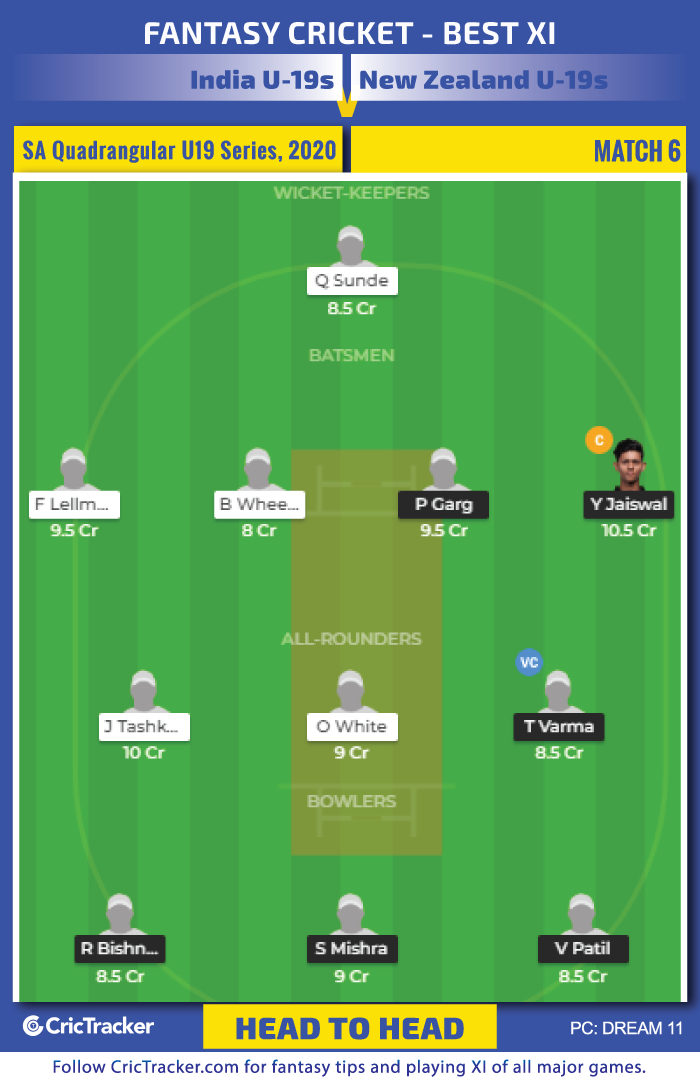 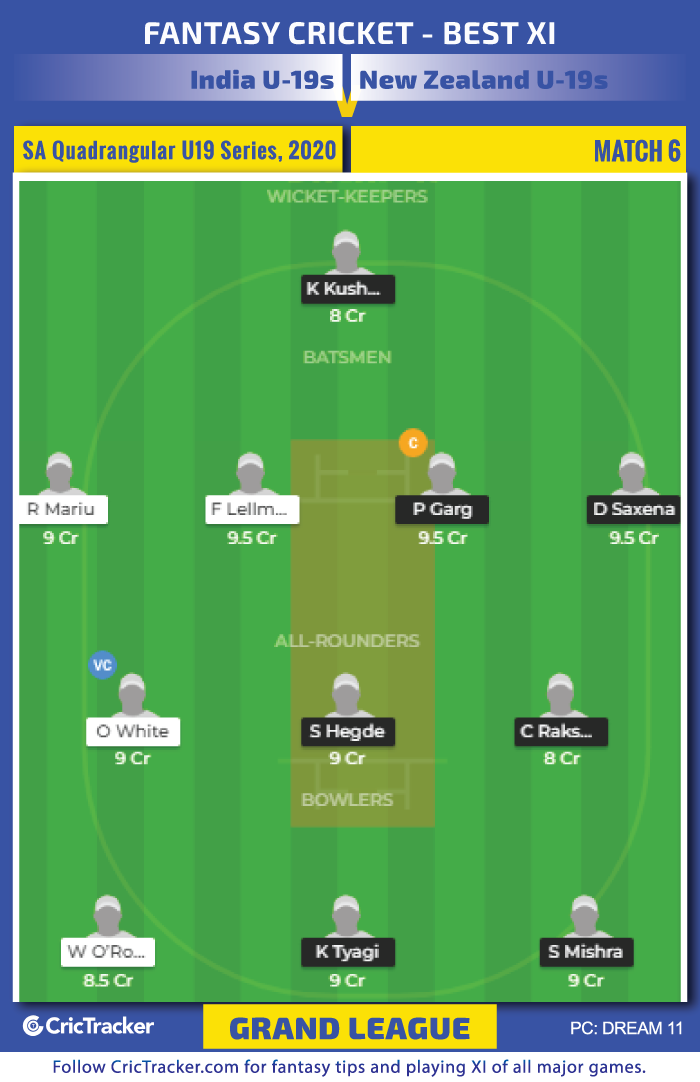 With this being a must-win game, New Zealand U19 might not make changes to their line-up. However, India U19 will definitely rest some of their main players. Wait for the XIs to be announced before finalising your team. Also, don’t forget to visit the website (or our Telegram channel) for the updated teams and playing XIs after the toss.

With the rain around, you can make any of the bowlers C or VC in Grand League as the new ball is expected to swing.

Divyansh Saxena is likely to be rested if the rotation policy of the Indian team is considered. So we haven’t picked him or not made him C or VC of our team. If he is in the playing XI, pick him and can even make him C or VC of your Dream11 Fantasy team.

India Under-19s are expected to win this match.