Haris Rauf has picked up only one wicket in the last Zimbabwe ODI series. You can avoid him while making your Dream11 fantasy teams. 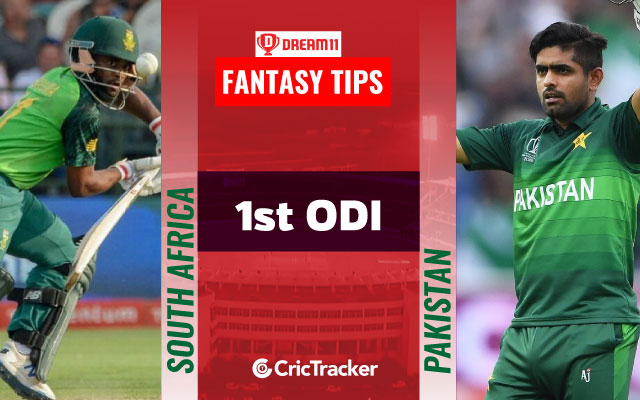 South Africa have played recently in Pakistan in Test and T20I formats, and now the action shifts to the rainbow nation. This series starts with 3-match ODIs starting from 2nd of April and ends with 4 match T20I’s. Temba Bavuma is appointed as South Africa skipper for both T20I and ODI formats against Pakistan.

On the other hand, Babar Azam will lead Pakistan in both formats. South Africa had lost both Test and T20I series in Pakistan tour and it will be interesting to see how they approach the home series with a newly-appointed skipper.

It will be a challenge for the batsmen to score runs in friendly seaming conditions. The surface will assist the seam bowlers and has got good bounce as well.

Playing XIs for SA vs PAK:

Pakistan skipper Babar Azam is an experienced player. Moreover, he is a consistent player in all forms of the game. In his ODI career, he has scored 3580 runs in 75 innings at an average of 55.93.

Shadab Khan is a handy lower middle-order batter and well known for his leg-breaks with a variety of variations. In his ODI career, he has scored 337 runs and picked up 59 wickets.

Andile Phehlukwayo has played 58 ODI matches and he is a decent performer for South Africa over the years. He has scored 563 runs and picked up 69 wickets with the best figures of 4 for 22.

Kagiso Rabada can trouble any batsman in the world with his fierce pace. He has already picked up 117 wickets in 73 innings at an economy of 4.99 runs per over with the best figures of 6 for 16.

20-year-old Shaheen Afridi has impressed the cricketing world with his exceptional bowling skills. In his early career ODI career, he has picked up 45 wickets in 22 matches at an economy of 5.29 runs per over.

Heinrich Klaasen was the man of the series in the last ODI series against Australia, scoring the most runs in the series with 242 runs in 3 matches at an average of 242.

Quinton de Kock is one of the most successful wicketkeepers in the world at the moment. He has accumulated 5135 runs in 121 ODI matches at an average of 44.65, with the highest score of 178.

Imam-ul- Haq has scored in his ODI career has scored 1834 runs in 40 matches at an average of 52.4. Considering, the first of the match series he is also another risky option for the captaincy pick.

Haris Rauf has picked up only one wicket in the last Zimbabwe ODI series. You can avoid him while making your Dream11 fantasy teams.