South Africa will miss their five players for this match while Pakistan's Shadab Khan has also been ruled out. 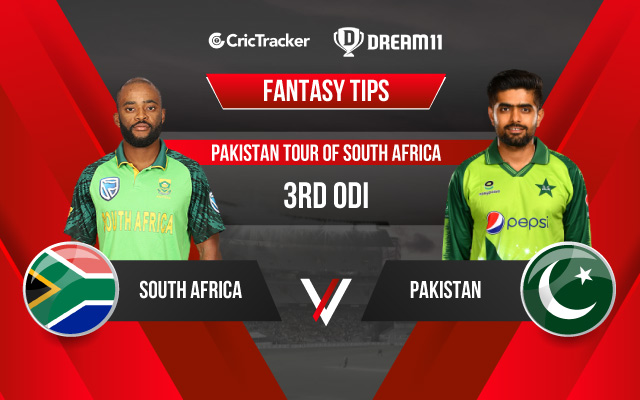 Hosts South Africa leveled the series 1-1 in the 2nd ODI to take it to the decider on Wednesday. It will be a hard task for them to win this series as they will be missing the services of their main players Quinton de Kock, David Miller, Lungi Ngidi, Anrich Nortje, and Kagiso Rabada in the 3rd ODI.

Fakhar Zaman’s valiant effort couldn’t help Pakistan to win the 2nd ODI. They played excellently as a group in both matches. Pakistan will be missing Shadab Khan who has been ruled out. Usman Qadir is set to make his ODI debut while Haider Ali is likely to replace Asif Ali.

The surface here at SuperSport Park is well known for its good bounce and carry. The batters can play their shots as well if they hang in there for some time. Batting first is a good option in the decider game.

Temba Bavuma rotated the strike well initially in the 2nd ODI and later carried on by hitting some delightful strokes, scoring 92 runs from 102 balls including 9 fours.

Pakistan skipper Babar Azam looked in fine touch with the bat in both the games in this series, scoring 103 and 31 in the 1st and 2nd ODIs respectively.

Andile Phehlukwayo is a handy pick for your Dream11 fantasy team. Despite going over 6 runs in the first two games he managed to pick 4 wickets and scored 32 runs with the bat.

Faheem Ashraf is the most economical bowler for Pakistan in the series. He has picked up 2 wickets in 2 matches at an economy of 4.83 and even scored 16 runs with the bat.

Beuran Hendricks has played only 7 matches for South Africa in the ODI format and has picked up 5 wickets at an economy of 5.41 with the best figures of 3 for 59.

Haris Rauf has picked up the most wickets for Pakistan in this series with 5 wickets in 2 matches at an economy of 6.3 with the best figures of 3 for 54. He has got a good bouncer at his disposal and it will be a key weapon for him.

Mohammad Rizwan had a rare failure in the last ODI but he played well for his 40 runs in the 1st match of the series. Overall in his ODI career, he has accumulated 770 runs at an average of 29.61.

Heinrich Klaasen will don the wicket-keeping gloves in the absence of Quinton de Kock in the 3rd ODI. In his ODI career, he has scored 505 runs in 19 matches at an average of 36.07 with the highest score of 123*.

Aiden Markram was well set for a good score in the 2nd ODI but got out at the wrong time after scoring 39 runs from 34 balls. It’s a gamble to make him a captain for your Dream11 fantasy team.

Mohammad Rizwan is not a bad choice for the captaincy for your Dream11 fantasy team. He got out for a duck in the 2nd ODI and it’s risky to make him as captain.