Another habit in most of us-- perhaps congenitally and hereditarily in most-- is searching for the better. We love to draw comparisons. 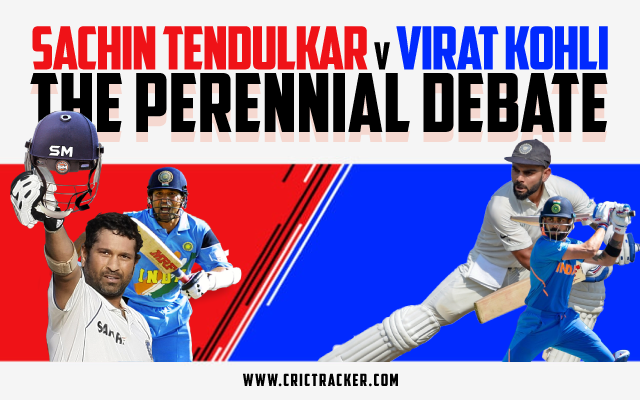 Do we need an answer to who’s better, when they both are the best? Shouldn’t we celebrate them individually?

A great virtue that we Indians possess is omniscience. So there are people sitting at small and dingy tea kiosks who know exactly how to lead a nation, the mechanic at a puncture shop will tell you how India is succumbing under diplomatic pressure from China, and the local vegetable vendor will tell what mistake Dhawan did in the last match against an in-swinging yorker of Mitchell Starc.

And why not? India is a vibrant– not to forget the largest too– democracy in the world. The bulky constitution of this diverse nation provides you an array of rights with pressing emphasis on freedom of expression. So in case you were perplexed at how India is a country of a billion opinions, the answer lies above.

Another habit in most of us– perhaps congenitally and hereditarily in most– is searching for the better. We love to draw comparisons. Doesn’t matter if what’s being compared is an apple and orange, it’ll be compared nevertheless.

And when the incomparable is not spared, how could something having even the remotest semblance and thus a possibility of comparability be let go? It shouldn’t be surprising for us to live between interminable comparisons between legends of the game.

What are the parameters then? Numbers? They trick you like nothing else. They give you convenient answers and half-baked truths. They allow you to tread in the binaries of good and bad, of average and above, of black and white. Statistical supremacy can be a façade. The purist in me hates numbers, but it is these which make things analyzable. Numbers are a global vernacular, deceptive nevertheless.

One such perennial debate is that of Tendulkar and Kohli. In fact, at no point in his career was Sachin not compared with another player. When he entered the scene, he was earmarked as the replacer of the legendary Gavaskar and was compared with him.

He spent time in the sport and found himself being compared to his contemporaries (read Ponting, Kallis, and Lara). When he started to surpass milestones one after the other, he was compared with Sir Don Bradman, notwithstanding the fact that their eras were separated by 7 decades- a lifetime!

Close to seven years after retirement from all forms of cricket, Sachin is now compared with the one who was in diapers when he made his international debut- Virat Kohli. Quite interestingly, the ones being compared are the least bothered about comparisons.

If you think being compared with other cricketers is the end of the story, it’s not. The genius Harsha Bhogle, whom I regard as the “Sachin of commentary” made an apt statement years ago when he said, “One of the problems you face being Tendulkar is that you are always compared with Tendulkar”. So amidst the diverse comparisons, the one of ‘Tendulkar vs Tendulkar’ was simultaneously on all the time.

Marvellous numbers of the Little Master

First-ever to reach a double century in ODIs (200 vs South Africa in 2010) and played more World Cups (6) than anyone else. And the only man ever to have made a century of centuries. However, this is just the tip of the iceberg.

Scoring 95 on 100 in an exam where the second ranker scores 94 and scoring 95 where no one touched 75 are two different things. Sachin belonged to the latter class of students. In his 24-year-long career, Sachin scored a gargantuan 34,357 runs in 664 matches.

Rise of another star

Virat Kohli is a phenomenon like none other and no one can dispute that. Over the years his achievements have only thrown us in disbelief. In 248 ODIs hitherto, Kohli has 11,867 runs at an incredible average of 59.34 and 43 centuries. In whites, Kohli has amassed 7,240 runs at an average of 53.63 and 27 tons to his credit.

Kohli has been India’s mainstay since long and his performance needs no validation. He walked in when the greats were parting ways and the team was undergoing transition. People searched Ganguly in Dhawan, sensed Dravid in Pujara, but the question everyone was stuck at was “Who will fill the void of the irreplaceable?” Who will take the position of the ‘almighty’? And then appeared Virat Kohli.

Did he fill the void? Did he turn into the “Second Tendulkar”? No… So, what did he do? He became the “First Kohli”. He didn’t fill the void for it could never be filled, but he ensured that India didn’t crumble like other nations (read Pakistan, Sri Lanka, and West Indies) did in their rebuilding phase.

The treachery of numbers

At times, it takes something you shouldn’t do, to know what you should do. So we should not be looking at the numbers, but let us have a look first and then know why we shouldn’t. 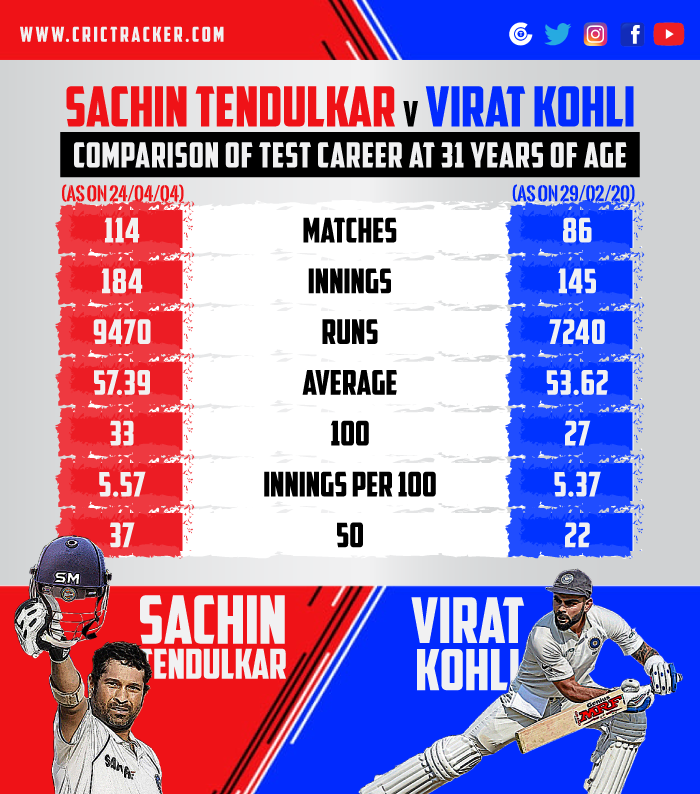 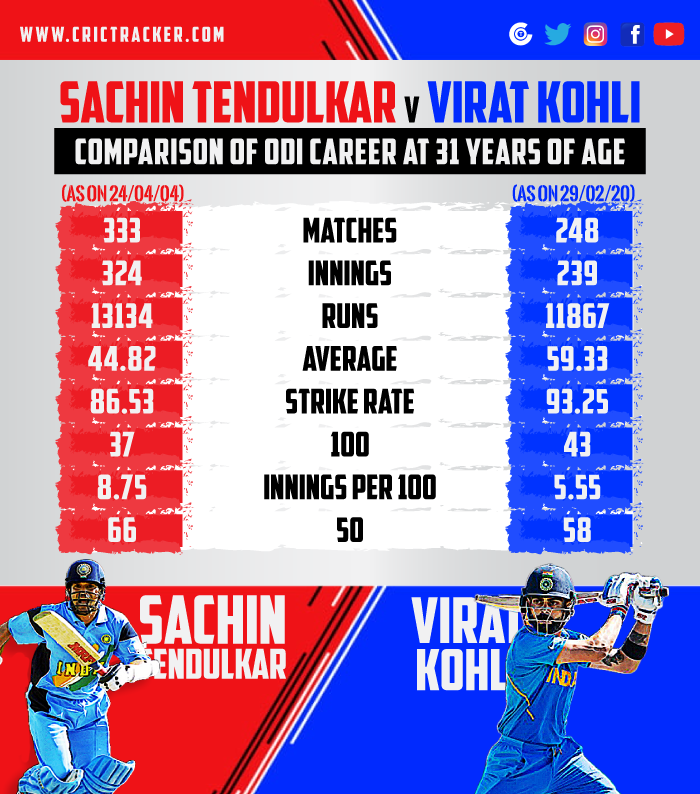 ^Virat Kohli has played 4 Tests & 9 ODIs after his 31st birthday (5th November 2019) which have also been included.

Test- Given his early start, Sachin played 28 more matches than Kohli at an age of 31. Ceteris paribus, to breach 15,921, Kohli should need around 175 innings (87 Tests) whereas 51 tons should take around 129 innings (64 Tests). Run tally seems far unless Kohli ups the ante real quick.

However, he might just go past Sachin’s 51 centuries, but again, the number of Tests India plays depends on the Future Tour Program of the ICC and where at times India plays 14 Tests in a calendar year, another year it plays not even 10.

ODI- The difference in matches played is yet again considerable. However, Kohli’s chance to breach Sachin’s ODI tally is much higher than Tests. Ceteris paribus, to breach 18,426 he should need around 132 innings, whereas, given his incredible conversion and a ridiculous pace of notching centuries, 49 centuries is just a matter of time.

To compare or not to compare, that’s the question…

A gritty match-saving 62 will always look pale in front of a glitzy 102. There are many untellable for numbers. Statistics never tell the quality of the adversary, the conditions under which the matches were played, contemporaneous practices, situational details, and a lot more. And looking at numbers in isolation of these factors can be duping yourself.

A student with X IQ and Y effort in exams of 1990 used to score 75 on 100. With the same IQ and effort, the student today scores 95! What changed? The standard of examination. Starting in 1989, Tendulkar’s willows were made with half the wood it takes to make one in the modern-day. The effort to clear the boundary in 2020 is much lesser from what it took in the 90s.

The balance between ball and bat has been on a constant decline. Pitches today are much flatter, while grounds much smaller. The boundaries are getting shorter and a six still means an achievement, but smaller than what it used to be. The use of new balls from both ends has dented bowlers and add to that modern fielding restrictions and the recipe of disaster is complete.

Of course, the margin is huge. But Sachin faced Walsh, Ambrose, Akhtar, Akram, Younis, McGrath, Warne, and Murli, during the course of reaching 10,000? Numbers don’t tell that. Another reason why statistical supremacy thugs.

Evolution of the game and team

There’s an entire format- one where Kohli has 2794 runs from 82 matches- that Tendulkar did not play. More than that, the advent of T20 cricket has made 50-over cricket faster. From the time when 250 was termed a winning total to the time when 350 is being chased with balls to spare, the game has travelled a lot. 12 and 14 runs per over were not a thing back then, but very much are today.

Not to forget, Sachin was a lone wolf for a good decade of his career. India underwent a transition in the 90s and solidified post Dravid, Ganguly, and Laxman in the 2000s. In the phase between, the man who carried the team singlehandedly many, many times was Sachin. Virat is luckier on the aspect to have the kind of team he has.

From the author’s lens

Sachin is much more than these mathematical figures of expression and to reduce him to statistics is an utter disgrace to his unmatchable legacy. He was the man on whose shoulder lied the hopes of billions every day. Imagine a nation’s mood depending on the form of one player. But it did!

Sachin was synonymous to hope, to achievement, to the zenith. The world used to stop, there were curfews when he stepped out. His dismissal meant switching off of the television for many for they wanted nothing else to watch but the Little Master. And statistics can never encapsulate the intangibles like these.

It is never fair to compare two generations as the current one always learns from the previous. Interestingly, Kohli can be termed a gift to us from the Master as it was him he took inspiration from. If we didn’t have Tendulkar, we might’ve never had Kohli.

Who knows? No wonder King Kohli rubbishes his comparison with his idol. In 2012, when Sachin played his last ODI, Kohli slam banged 183. After Sachin was dismissed in his last Test, Kohli came in and slapped a boundary the very next ball. These… these were the moments of telling that the baton has been passed.

That’s what Kohli is. The successor of Tendulkar. The flag bearer of his legacy and I must admit, there could not have been a better contender. How blessed are we that we got both, Tendulkar and Kohli? Why do we need an answer to whose better, when they both are the best? Shouldn’t we celebrate them individually?

Sachin made innumerable records, probably so many that if ever there was a record of having the most records, Tendulkar will have that as well. But that’s the thing with any record. It appears unreachable and yet is reached. Each when made looks unbreakable, yet is broken and replaced by an equally unbreakable one. Will Kohli cross some by his end? Yes. Will Kohli cross the phenomenon of Tendulkar? No.