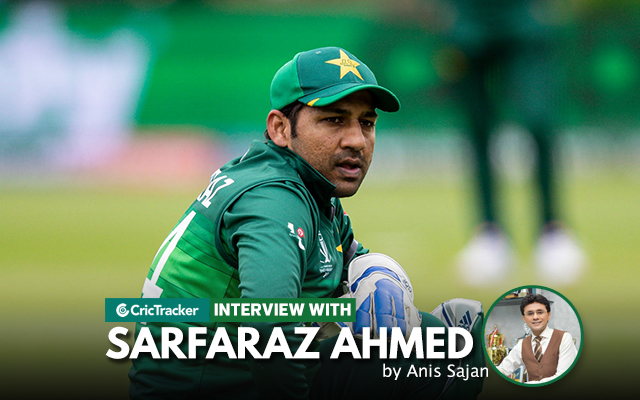 Former Pakistan captain Sarfaraz Ahmed recalled one of the best moments of his career. Under his captaincy, Pakistan won the Champions Trophy in 2017 beating arch-rivals India in the final. June 18, 2020, marks the third anniversary of the memorable moment. He also talked about the way the players responded when they were under pressure and eventually managed to triumph.

Pakistan were under tremendous pressure after losing to India in the league stage. They were criticized a lot for not playing well. However, the team made it to the final against all the odds defeating Sri Lanka in a must-win game and then hosts England in the semi-final.

While Sarfaraz was at the helm, Pakistan also dominated the ICC T20I rankings. He cited the way he led the team during that period.
Before being dropped, his fitness was also an issue. However, Sarfaraz is looking fit as ever and he opened up on his routine during the lockdown. He also won the Pakistan Super League in 2019 leading the Quetta Gladiators and narrated his experience of playing in the league over the years. All this and much more in this interview.

Here are some excerpts from the interview

The lockdown is going on over the world but you are absolutely fit and well, tell us what have you been doing in the last two months?

Anis bhai as you know when the lockdown started, first 10-15 days were really difficult, and I did not even understand how to stay home the whole time. As in, the pandemic is happening, the coronavirus is here, and with this how-to keep oneself safe. So first I tried within the house itself, how much ever exercise I could do I did.

After that slowly, when 15 days were over, it was my good luck that there is a cricket ground near my house, I was happy that I could exercise, do some running over there. There was no one in the ground so I could run there. For the rest of the exercises, I used to do at home itself. So, in this way, I tried to keep myself fit. If I did not do all these things it would have become very difficult for me to maintain myself.

Let us talk about Cricket, If the topic of Sarfaraz comes up we can all never forget. At least me, no Indian can forget the way you beat India comprehensively at the “Champions Trophy.” India had come in as favorites to the finals, but you first beat England in the semi-finals and then India in the finals. Tell us, how did you feel after winning?

That journey was forceful, and it was such a journey that forget me, every other player will remember it for the rest of their lives. That was the feeling at that time. As you know, at that time India’s team was obviously quite strong. And that’s true not denying it. It was obvious, the way they performed while batting. But it is just Allah’s blessings that decide.

That day Allah was with us and we performed really well and so because of that the results was in our favor we got the award in our hands. That journey was just, that final I still have not watched again, I did not have the courage to watch it. It was such a big achievement at those finals that I cannot even explain.

You very well know how India and Pakistan matches are. No matter what kind of match it is, whether it is bilateral series or any tournament people from both sides get all excited. At the Asia Cup, I had met Shikhar Dhawan in a program in Dubai and we both feel the same way. For us, we want to win against India, for them, they want to win against Pakistan. The public’s expectation is there to win against India. So that feeling was quite an outstanding one.

After an extremely long time, in a big event, Pakistan won against India which was a strong team after a very long time in a major tournament. So, everyone in Pakistan was very happy. For me, and even for my family members, 18th June was a date to remember for life. Absolutely, no one can forget.

The way you defeated Sri Lanka in that match then Pakistan qualified for the semi-finals and played England with a young team and defeated them comprehensively! Followed by team India in the next game. For that you know, you will always be remembered, and we are all quite happy about this. As an Indian, at that moment, I felt bad that India had lost. But losing is part of the match.

Of course, there is this thing that people from India and Pakistan are quite passionate about Cricket and have loads of love for the game. I have personally seen that there is a good friendship between Pakistani and Indian players.

When I had gone to in 2007, and apart from that, there was an India vs Pakistan match that I had come for in 2008. I have also seen Indian and Pakistani players sit together and eat. But now, unfortunately, it is a scenario where-in we are not able to play matches, but Insha Allah, I pray that the times become better and we will play India vs Pakistan for sure!

This was about Champions Trophy but how can we forget the T20s? Under your captaincy, Pakistan won 11 series and for two years, was the Number 1 team. What kind of magic did you put on your team that you all maintained a winning streak?

In 2016, I became captain for the first time and I had a lot of young boys with me, I had only one senior player and in between Hafeez bhai joined but unfortunately left soon. In my team, there were young boys and you know, you have played so many T20 matches, the same amount I have played too. In the last 10 to 12 years, you have made at least two teams with 27-28 players. T20 cricket happens in Dubai and how fast it goes I have seen and experienced it.

In T20 cricket, the point is that you play and win with young players the important part was our fielding. We won many matches that we were about to lose because of our fielding. You can bat and bowl, but for me, as a captain, I feel the main factor behind our success was our fielding.

We have amazing fielders like Shadab Khan, Hasan Ali, Fakhar Zaman, Faheem Ashraf, and Babar Azam. All these boys did such great fielding. In terms of seniors,  we had Sohaib Bhai, the way he covered the whole long-on on and mid-wicket areas. I think it is really because of this that our team got such a huge boost and we won such big matches because of our fielding.

There is no doubt in that because people say that T20 is an unpredictable format, but you proved it is predictable and retaining the no. 1 ranking for two years. I do not think that any other team in this world has done this or will be able to achieve such a feat because it is so unpredictable.

Yeah, the T20 format is such that every day you have to play an amazing kind of cricket. If you have 2 bad overs, the match slips out of your hands. It is due to Allah’s grace that we, the Pakistani team could keep it up for 2 years and it is a big thing.

Now if we do not talk about Quetta Gladiators that cannot be done. Even in that, you led your team I think 3 times to the finals. I think 2 times you lost and one time you won, am I right? Even you drove that team well, and I always think that if you keep going this way, every player including your owner Nadeem Omar have said that there is no captain like Sarfaraz!

You see, Nadeem bhai to me, I am like his child and I represent him while playing, and even our manager Azam, he is our president and in the way you just mentioned Quetta Gladiators, even you have made your own team under Danube that plays in T10 by the name the Bengal Tigers and later changed. The family that is given to us, matters so much. If the relationship between players and owners and the management is good, it reflects in the efforts of the players. It impacts the team and they are more relaxed while playing.

So, Nadeem bhai has the same quality that his relationship with the players is like one of an elder brother. He says “no problem, whether the performance was good or bad is part of cricket. It happens.” The way he carries his team, the way he meets them, takes care of them, it matters a lot. Cricket we play for a month, 1.5 months but we cannot say oh just work on your cricket skills only. The team bonding, how they gel is important and it is how Quetta Gladiators play, and it is because of this that consistent performance is kept up.

At the Champions Trophy final, if you had won the toss, would you have chosen to field?

Yes, we would have chosen to field because our flow was like that ever since South Africa match we had been batting second and we had become used to that. And that day, as you know, it was extremely hot while the match was going on. In the morning, the balls used to swing, but after a while, it started settling and the pitch became flat. So, we would have also decided to field in that condition.

Mehwish Hayat or Ayeza Khan. Who do you like the most?

Sohaib Maqsood and Sohail Tanvir. Who is the lazier one?

Wasim or Waqar – A better bowler?

Shaheen Afridi or Naseem Shah. Who is the rising star in Pakistan?

Amongst the Bollywood actresses, Katrina Kaif or Deepika Padukone?

Ohh, for me Katrina Kaif. I will go with Katrina.

From Bollywood Actors, from the 3 Khans, Aamir, Shah Rukh or Salman?

One and only Bhaijaan: Salman Khan

Now also Sarfaraz you are maintaining that after becoming so fit?

You see Anis bhai, it is necessary if I do not eat that then how will anything happen? But of course, the day we have Briyani, after 4-5 hours I have to burn those calories.

Who is the number one player in the world along with you in today’s time?

In today’s time, there should be no doubt, it is Virat Kohli who’s the world’s number 1 batsman. But, as I have told you before that when I have been behind the wicket, I have felt that although Rohit Sharma does not have that many runs in Test matches, the timing that he has is great. But the number one player in the world is definitely Virat Kohli. Nobody can match him.

If Sarfaraz Ahmed was not a cricketer, what would he do in life? What other sport would he play?

My family background is such that we have sportsmen. My uncle used to play cricket; my father used to play Badminton. So obviously, I feel that some way or the other I would have been in sports itself.