Sorath Lions will feature in the Saurashtra Premier League final against the Zalawad Royals who defeated Kutch Warriors in the last league match to get the ticket to the grand finale. Interestingly, the Zalawad Royals and Sorath Lions began their respective campaigns by facing off each other. After losing that game, the Zalawad franchise won all the three matches they played to qualify for the final.

On the other hand, the Sorath team’s only defeat came against Kutch Warriors where they recorded the lowest team total in this season of 105. In the very next game, they bounced back by chasing down 162 against the Halar Heroes. Zalawad’s Sheldon Jackson is the highest run-getter having scored 169 runs with two fifties while Sorath’s Chetan Sakariya is leading wicket-taker with nine wickets.

The final match of the Saurashtra Premier League T20 2019 will be played between Zalawad Royals and Sorath Lions at the Saurashtra Cricket Association Stadium in Rajkot.

The Saurashtra Premier League has witnessed low scoring games throughout the season. The highest total in the tournament has been just 167 and only on four instances a team ended up posting 160+. Given the lack of rest days, there is hardly a chance of the final being a high-scoring one, unlike the group matches. 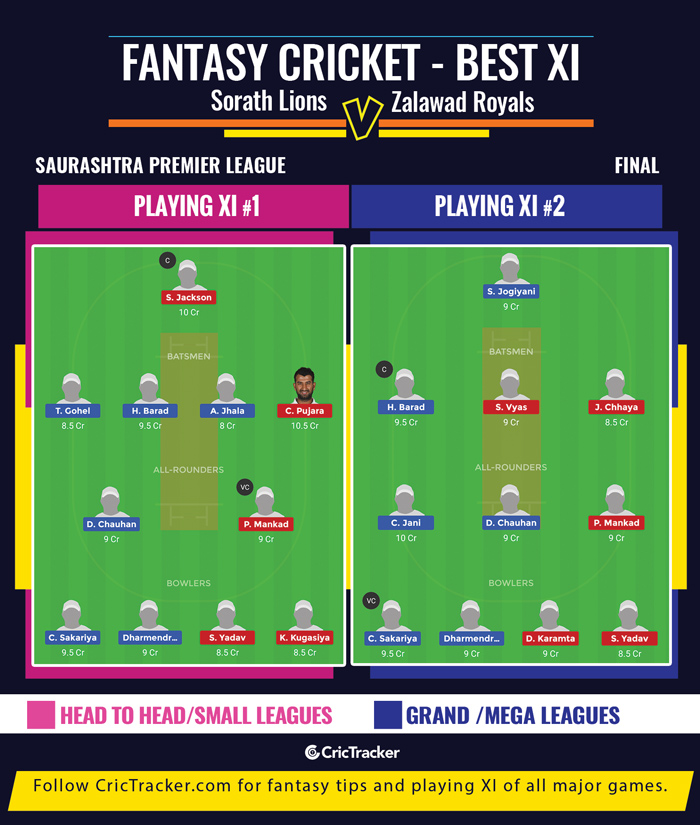 Cheteshwar Pujara holds the key in building the fantasy team for this game. In this low scoring tournament, Pujara doesn’t require to do something out of the box which justifies his selection and making him the captain or vice-captain. However, his cost of 10.5 credits won’t help in picking a high priced all-rounder or bowler who could earn the same number of points if not more.

Sorath Lions are expected to win the inaugural edition of the Saurashtra Premier League.

Get the latest Cricket News and updates from the Saurashtra Premier League, Match Predictions, Fantasy Cricket Tips and lots more on CricTracker.com.