Cheteshwar Pujara’s Royals take on Sorath Lions in the second game of the Saurashtra Premier League 2019.

After intense deliberations, the inaugural Saurashtra Premier League finally kicked off on May 14th with a schedule comprising of 11 matches, 9 of which will be played under lights. The second match of the tournament will see Sorath Lions take on Zalawad Royals. Cheteshwar Pujara’s Royals take on Sorath Lions in the second game of the SPL 2019.

The trio of Jogiyani, Chiraj Jani and Dharmendra Jadeja will form the crux the Lions squad. With close to 100 first-class matches behind him, Jogiyani will lead the squad. Dharmendra Jadeja has 198 wickets for Saurashtra in Ranji Trophy and his 4 overs of left-arm orthodox spin will be priceless for the Lions.

Tha Cheteshwar Pujara will be leading the Royals is a shot in the arm for not just the squad but also for the league itself. One can only imagine the wealth of learning that he will be imparting in the dressing room while grooming the youngsters in the camp. Giving him company at the helm will be Sheldon Jackson, another senior statesman from Saurashtra.

C Pujara: easily the biggest name that will grace the turf at the Saurashtra Premier League, Pujara will surely add a lot of colour to the tournament. That said, how well he does in the shortest format remains to be seen.

Sheldon Jackson: one of the key batsmen in the Saurashtra Ranji Trophy squad, Jackson will be a vital batsman in the Royals’ camp.

Dharmendra Jadeja: the “other” Jadeja in the Saurashtra Ranji Trophy camp, Jadeja’s spinners will be crucial for Royals’ game plan.

Chirag Jani: the all-rounder brings a wealth of first-class experience with him. With bat and ball, Jani will have lot loads to do if the Lions are going to finish on top.

Sagar Jogiyani: with 96 first-class matches under his belt, Jogiyani is the senior statesman in Lions’ outfit. The success of Lions will depend on how Jogiyani will control the reigns. 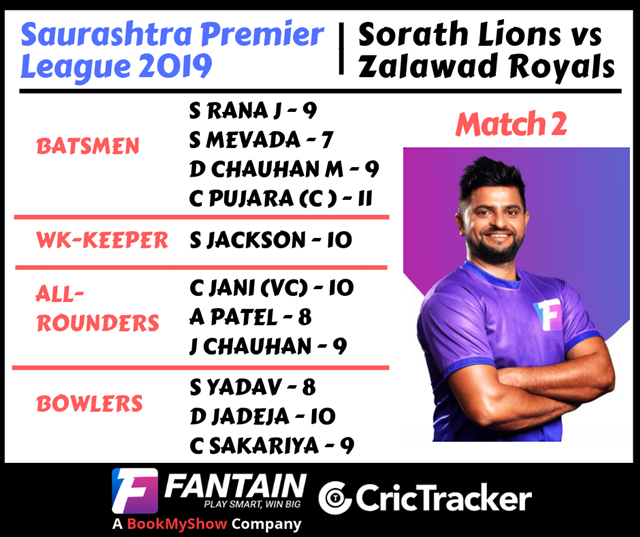