With the finals of the Saurashtra Premier League on May 22nd and Halar Heroes already at the top of the points table; the Lions must give this match their all to avoid last minute stress. Back to back matches for Sorath Lions, they face Kutch Warriors on the 18th and the Halar Heroes on the 19th. Here is all you need to read for both the teams before picking your Fantain XI.

The Lions’ first match against Zalawad Royals showed a comprehensive performance. Not only did they manage to restrict the opponent to a low total, but they also hit the target with more than 3 overs to spare. With only 5 teams in the tournament, the NRR could play an important role.

Having played three matches and won two, Halar Heroes have done well for themselves. They face Sorath Lions after losing to Zalawad Royals by a whopping 10 wickets. They are not likely to change their playing XI. In their defence, Pujara and Jackson of the Royals played a strong game to win the match.

Chetan Sakariya: Sakariya took four wickets to restrict opponent Zalawad Royals to a low total. Be it his performance at the Ranji Trophy last year or at the Syed Mushtaq Ali Tournament earlier this year, Sakariya has always made it a point to contribute.

A Kothariya: Man of the match against Gladiators for his 56-ball 72 runs, Kothariya has played a key role in the Heroes being on top of the table.

Parth Chauhan: So far in the tournament he has earned points on the lineup in three different ways: runs on board, wickets in hand and catches to win matches.

A Vasavada: Captain to Halar Heroes, and with 116.50 points on the Fantain Fantasy App, Vasavada has proven to be truly worthy. He has a consistently high Strike rate. 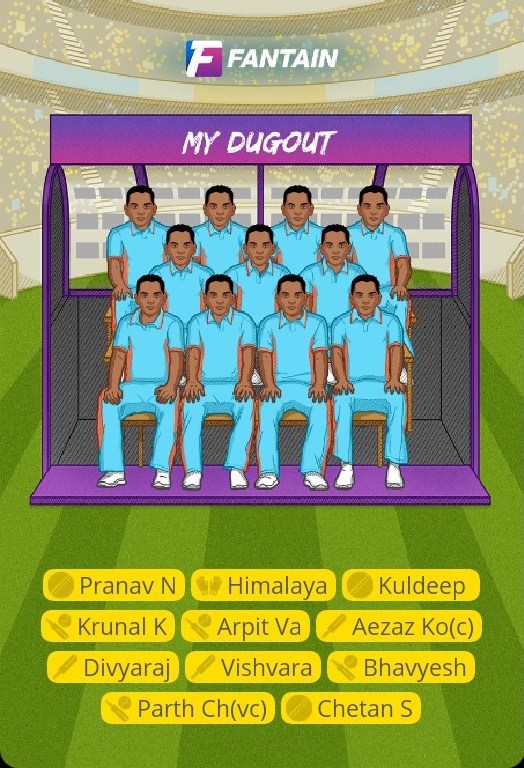