India rockets to the second position after winning the Chepauk Test.

India thrashed England by ten wickets in the third Test on Thursday to take an unassailable 2-1 lead in the four-match series. In a game where fortunes swung from one side to another throughout, India eventually came out on top as the contest at the Narendra Modi Stadium in Ahmedabad ended inside two days.

Chasing a paltry target of 49, India reached home in the 8th over with Rohit Sharma (25*) and Shubman Gill (15*) sharing an unbeaten 49-run stand. Rohit finished the game in style by dispatching Joe Root for a maximum. Earlier in the second innings, India bowled out England for just 81 thanks to yet another stunning display from their spinners Axar Patel and Ravichandran Ashwin. Axar, who had picked up 6 wickets in the first innings, took 5 for 32 in the second innings while Ashwin picked up 4 for 48.

For England, Ben Stokes was the top-scorer with 25. Prior to their collapse in the second innings, England had bowled out India for just 145 to claw their way back into the game. India started day two on 99 for 3 and their remaining seven wickets for just 46 runs. Root was the star for England, taking a career-best 5 for 8 while Jack Leach also picked up 4 wickets. 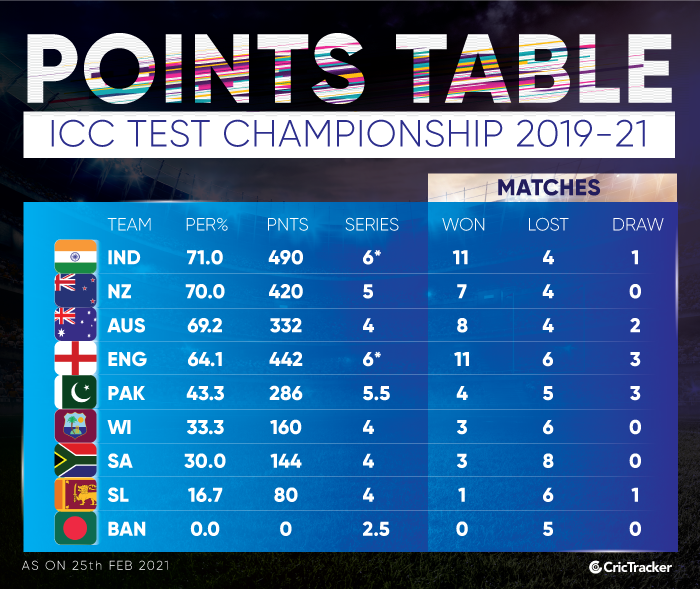 India in contention for ICC WTC final, England out of the race

The win in Ahmedabad has further brightened up India’s chances of making it to the final of the ICC World Test Championship (WTC). New Zealand have already booked their place in the final which is scheduled to be played in June at the Lord’s. On the other hand, England are out of the race for a place in the WTC final after their latest loss

Before the start of the ongoing series, India, England as well as Australia were in contention for the one remaining WTC final spot. After the result in the third Test between India and England, only the former and Australia are in the race. So here are the scenarios for India and Australia to book a mouthwatering clash with New Zealand in the final. 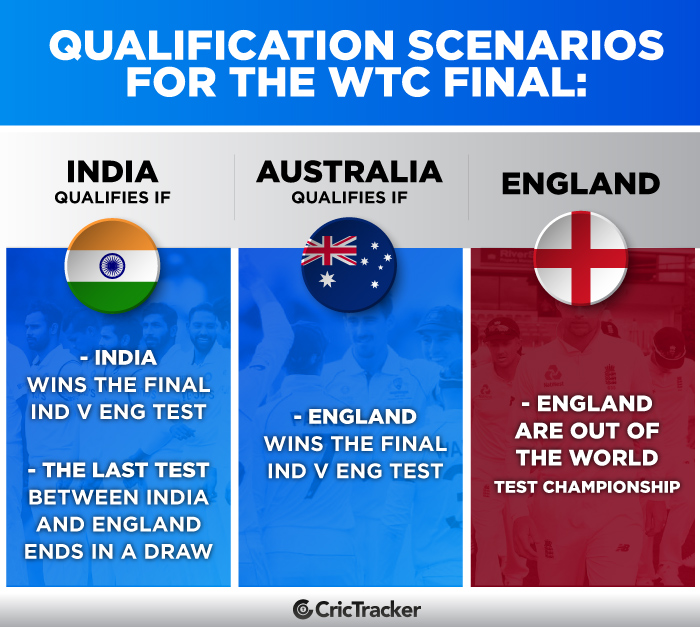 A draw in the fourth and final Test will be enough for Virat Kohli & Co. to make it to the final of the inaugural edition of the ICC WTC. The hosts just need to avoid a defeat in the upcoming game to progress to the final. India need to win the series 2-1 or 3-1 to achieve their target.

While Australia do not have their fate in their own hands, they can progress to the final if England manage to stun India in the fourth Test. A win for England will see the series end 2-2 and in that case, Australia will join New Zealand in the WTC final.