Both teams started the tournament with a string of defeats and are now standing on the verge of a finals' berth.

Brisbane Heat started the 2020-21 edition of the Big Bash League on the backs of quite a few losses. They also lost their skipper Chris Lynn for a few matches due to injury. However, the team has made a strong comeback and is one win away from booking a place in the final against the Sydney Sixers.

They will next be facing the Perth Scorchers in the Challenger on Thursday at the Manuka Oval in Canberra. Like the Heat, even Ashton Turner’s Scorchers also came back after defeats in the initial phase. They will be looking to make amends after losing to the Sixers in the Qualifier on Saturday.

The pitch at the Manuka Oval has been a belter for batting. Teams batting second have gotten a significant amount of assistance from the surface. Hence, batting first shouldn’t be the way forward for the teams. The conditions will be cloudy with the temperature around the 22 degrees Celsius mark.

Playing Combinations for SCO vs HEA

Jason Roy has been a fulcrum of the Scorchers’ batting unit in the ongoing tournament. In 12 matches, the right-hander has notched 355 runs at an average and strike-rate of 32.27 and 130.51 respectively. He also has two half-centuries to show for his efforts. The Heat can’t afford to let him settle.

Chris Lynn, without a shred of a doubt, has been a fulcrum for the Heat in the T20 league. In 12 matches, the veteran has scored 436 runs at an average and strike-rate of 36.33 and 156.27 respectively. If Lynn gets his eyes in, then the Scorchers could be in for some massive trouble. 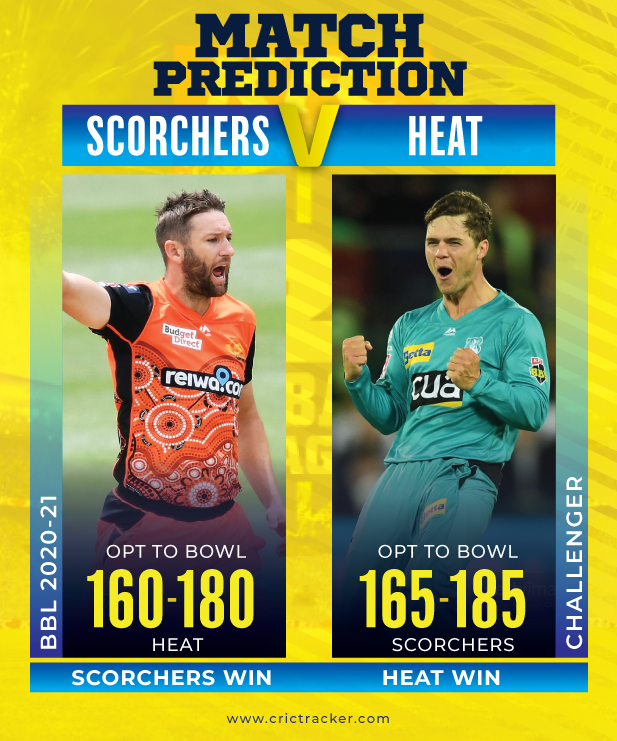