The weather forecasts don't appear promising for a contest of cricket on Tuesday.

Weather in Scotland has not been very kind to the cricket lovers in the last couple of weeks, having downed a handful of matches. The first ODI against Sri Lanka was no different for the Scottish side, who are just about beginning to find an identity for themselves in cricket and are losing some crucial matches to the rain gods.

They were in a decent position in the second ODI against Afghanistan and perhaps had a good chance of winning the game. But the rain gods didn’t allow the game to continue after a point, which saw the result pipping in the visitors’ favor via D/L method.

Not many believe Sri Lanka is sending a competent enough squad to the World Cup, despite having some decent names in the side. They do have the experience, but not a lot of consistency. That is what sabotaged their ambitions in the Asia Cup last year but they don’t want to be some unfortunate victims in the biggest possible stage.

Well, the weather reports once again predict some scattered showers on Tuesday, much to the disappointment of the home crowd. The pitches here have been a bit batting friendly, with the average score in the last five games being 290. Bowling first on this track could be a bonus for the side winning the toss.

Skipper Kyle Coetzer and Calum MacLeod have been brilliant while facing Asian sides, especially against Afghanistan. They have some good names in the middle order like George Munsey and Craig Wallace who can garner some crucial runs. Bradley Wheal, Mark Watt, Alasdair Evans and Safyaan Sharif will be handling the bowling department for the hosts.

Skipper Dimuth Karunaratne will straightaway come in as an opener alongside Thirimanne with some dependable names in the middle order like Kusal Perera, Angelo Mathews and Kusal Mendis. Thisara Perera has shown some form and their fans would want him to continue that. Suranga Lakmal and Isuru Udana will be crucial in the bowling attack led by the veteran Lasith Malinga.

The prediction is for Sri Lanka to win the match if the result is possible on the day. 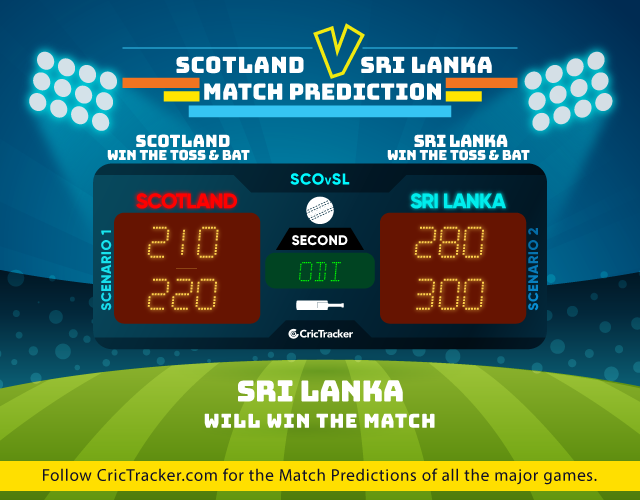