Shahid Afridi's catch in T20 WC 2007 final was most pressurised catch of my career: Sreesanth

Shahid Afridi’s catch in T20 WC 2007 final was most pressurised catch of my career: Sreesanth

Sreesanth still vividly remembers two of the most crucial catches he took in T20 WC 2007 final against Pakistan. 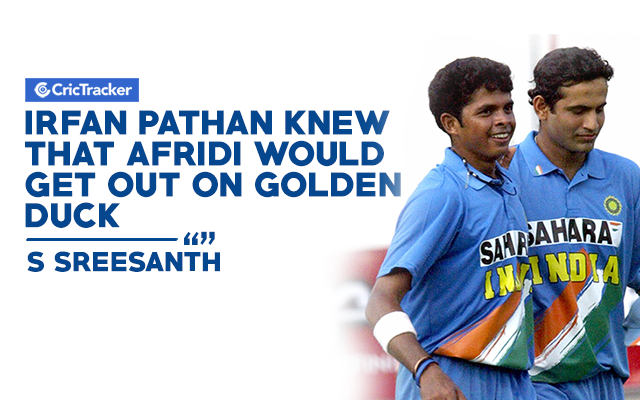 India pacer Sreesanth has seen it all in his career. But he is also one of those very few cricketers who has won both T20 and 50-over World Cup for the country. He was part of India both triumphs in 2007 and 2011 respectively. Rather, he was at the centre stage of all the action in the middle in the inaugural T20 World Cup final against arch-rivals Pakistan.

Sreesanth went for 44 runs in his four overs in that game and picked Sohail Tanvir’s wicket. But more than his bowling, his fielding in the game is still talked about, especially of Misbah-ul-Haq‘s catch which scripted history for India. Misbah had tired to scoop the ball when Pakistan needed six runs from four balls only to mistime the shot and it was Sreesanth at fine leg who managed to take the catch and the rest is history.

While many still haven’t forgotten it, according to the 37-year-old, more than Misbah’s catch, it was during Shahid Afridi’s catch that he was under more pressure. Recalling the moment while speaking to host Adarsh in a live Instagram session with CricTracker, the Kerala cricketer stated that Irfan Pathan knew Afridi would hit the ball in the air and had already told him to be ready to take the catch.

“For me, Afridi’s catch was the toughest. Irfan Pathan told me that ‘Afridi will surely try to hit me for a six, ball will come towards long off and he will get out on first ball, tu pakad lena’. He saw that wicket happening, he was literally having Afridi’s wicket many times. Luckily ball went up in the air, and I caught it,” Sreesanth said.

I wasnt even thinking to catch the ball, says Sreesanth on Misbah’s dismissal

Sreesanth, like many, still vividly remembers taking Misbah’s catch as well and has revealed that he was literally not thinking to take the catch when the ball was coming towards him. Rather he was looking to somehow stop the batsman from running two.

“Coming to Misbah’s wicket, I was thinking to dive right or left and stop the ball so that Misbah will not take two runs. I wasn’t even thinking of catching the ball. Even Dhoni bhai said in an interview that it (Misbah’s catch) was one of the most pressurised catches in Indian cricket history. But, for me Afridi’s catch in that game is the most pressurized catch in my career,” he further added.