Rashid Khan is a big name, but may not be a good option as captain, bearing in mind his form.

The Final of the Shpageeza Cricket League (SCL) 2019 will be played between Band-e-Amir Dragons and Mis Ainak Knights at the Alokozay Kabul International Cricket Ground.

It’s time for the all-important final of the 2019 Shpageeza Cricket League. The Mis Ainak Knights and Band-e-Amir Dragons are set to lock horns in Kabul. It will be the third year in a row where Rashid Khan and Mohamamd Nabi’s team would be facing off in the Grand Finale of the domestic T20 extravaganza. The Knights, captained by Nabi won four out of their five games in the league stage.

In their previous meeting with the Dragons in the Qualifier 1, the Knights won by seven wickets. Hence, Nabi’s men will have the psychological advantage over their opponent. The Dragons can’t be dismissed out of sight. Rashid’s men won three out of five matches and then lost to the Knights. But they managed to escape narrowly versus the Kabul Eagles, winning by three runs in a high-scoring affair.

The weather in Kabul has been fairly pleasant for cricket over the last few days. The temperature is expected to be around the 19 degrees Celsius mark. The humidity won’t be high either with the numbers mostly in the mid-30s. As far as rain is concerned, there are minimum chances of the same. All in all, an uninterrupted final seems to be in the offing on Friday afternoon.

The pitch in Kabul has turned into a batting paradise as the tournament has progressed. 447 runs were registered in the last game as the Eagles nearly chased down 226. However, in the last 18 matches, only four went in favour of the chasing teams. Hence, for the time being it seems sensible to bat first, put runs on the board and then exert pressure on the opposition batting unit.

Javed Ahmadi is the leading run-scorer of the tournament with 338 runs at an average and strike-rate of 67.60 and 149.55 respectively. He also rolls his arms over and hence should be a must in the team. Nijat Masood may not be a big name, but has been effective with 11 wickets, the highest in the series. Afsar Zazai and Noor Ali Zadran are the other big picks. 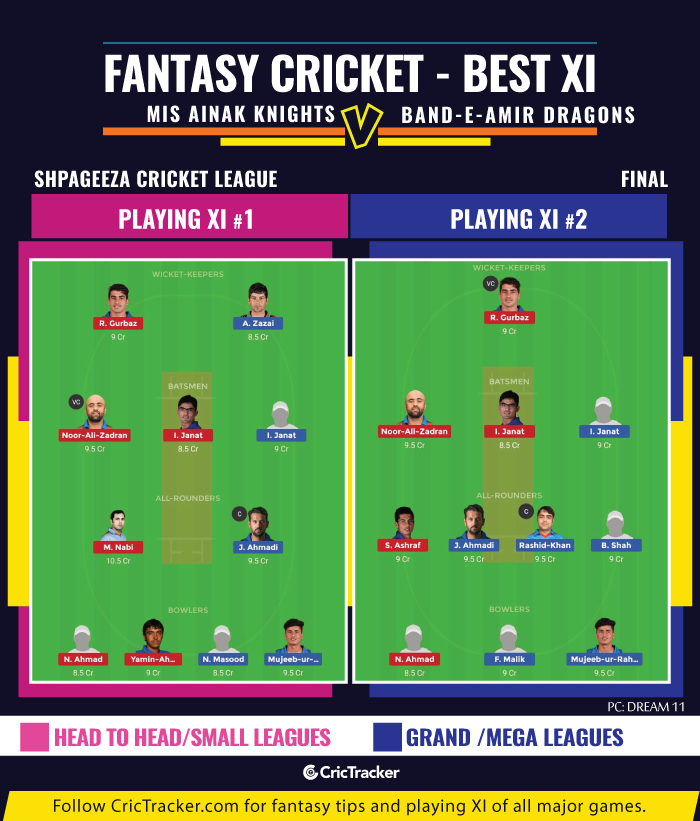 Rashid Khan opens the batting for the Dragons and also bowls his quota of four overs. Hence, there will be a bit of temptation to make him the captain. But he has been far from his best. Javed Ahmadi and Noor Ali Zadran are the safe choices as captain.

Mis Ainak Knights are expected to win the contest.