The Qualifier-2 of the Shpageeza Cricket League (SCL) 2019 will be played between Band-e-Amir Dragons and Kabul Eagles at the Alokozay Kabul International Cricket Ground.

They might have won three games in a row to finish second in the points table. However, the Band-e-Amir Dragons couldn’t push forward as they lost to Mis Ainak Knights in the Qualifier-1. Yet, since they finished in one of the top two spots, it is not all done for them. Rashid Khan and his men will get another go at making it into the final when the face the Kabul Eagles in the second Qualifier.

The Eagles batted beautifully in the Eliminator game of the SCL 2019. Thus, they managed to defeat the Speen Ghar Tigers by 16 runs to advance forward in the tournament. It is a wonderful opportunity for both these teams and they’d surely want to put in their best efforts. Going by the recent form, there isn’t much that differentiates between these two sides. It is all about holding onto their nerves in this crunch encounter.

In both the games on Wednesday, the pitch was great to bat on. The ball was coming on nicely and thus high-scoring fixtures were produced. It might not change much on Thursday and we might get to see a good batting surface once again.

Afsar Zazai is in good form and can be the wicket-keeper for both your Dream11 Fantasy teams. Karim Janat and Javed Ahmadi are your top picks for his game. From the bowling department, you can bank on the likes of Nijat Masood, Waqar Salamkheil and Mujeeb Ur Rahman. 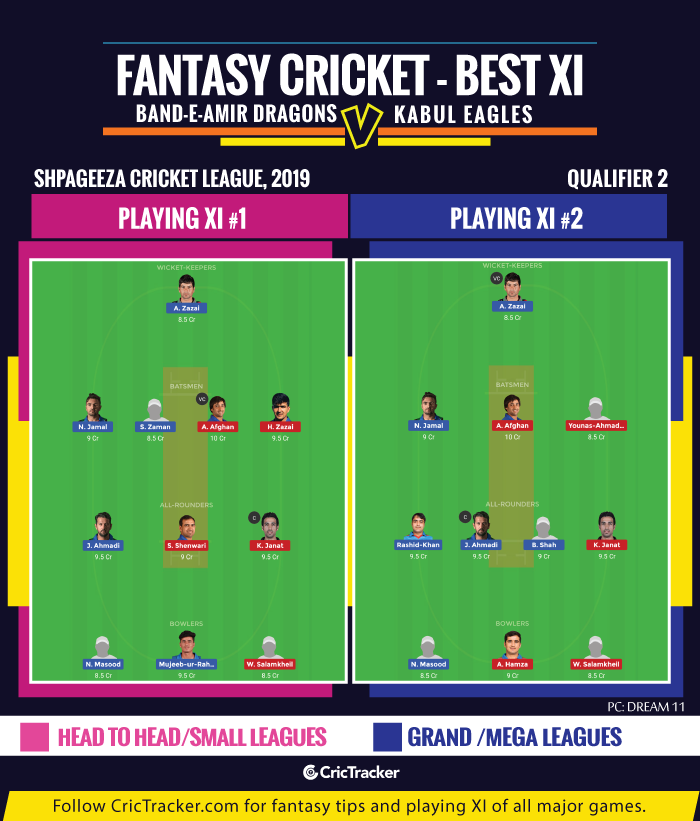 Band-e-Amir Dragons are expected to win this game.