Timothy David has six scores in excess of 60 runs in six out of his last seven matches for Singapore.

The 3rd match of the Singapore T20I Tri-Series 2019 will be played between Singapore and Zimbabwe at the Indian Association Ground in Singapore.

This game will be available on Fan code in India and will be streamed on the Wec Sports’ Facebook page and YouTube channel.

The hosts Singapore suffered their first defeat in the T20I format as they went down in their first game of the Tri-series against Nepal on Saturday. The Nepal skipper Paras Khadka smashed an unbeaten ton to help his team chase down the target of 152 with four overs to spare. The stand-in captain Timothy David scored yet another fifty for Singapore but a special effort from Nepal saw them winning the game.

The home side will now take on Zimbabwe on Sunday in the 3rd match. During the tournament opener, Zimbabwe sealed a 5-wicket win over Nepal. Chasing a target of 133, Zimbabwe lost three of their top four batsmen for ducks. They were five down by 10th over with 64 runs on the board. But a record 6th wicket partnership ensured Zimbabwe completed the chase with 11 balls and 5 wickets to spare.

Sunday’s game could be well affected by the weather. Scattered thunderstorms are expected throughout the day and the major impact will be during the match timings.

Paras Khadka’s knock and Nepal’s chase was a testimonial to how good the track at the Indian Association Ground played thus far. Teams batting first will surely aim for getting close to 170 for defending the total. The pitches in two matches looked fair and did not have much help for the bowlers.

While the focus of Singapore’s batting has been on Timothy David, another top-order batsman Surendran Chandramohan has done well thus far. In nine matches this year, Surendran has 377 runs at an average of 47.12 with four fifties. Janak Prakash showed what type of role he can play for the hosts in the previous game. He scored runs while batting at No.5 and also took the only wicket to fall in Nepal’s innings.

Brian Chari is expected to come good. He struck a hat-trick of fours in the first over of the chase but didn’t last long. In his first International game since October 2018, Wellington Masakadza bowled an economical spell. He conceded only 19 runs in his four overs and also took a wicket. Sean Williams took two wickets in the previous match will hope to score his first runs as skipper on Sunday.

Timothy David has six scores in excess of 60 runs in six out of his last seven matches for Singapore. 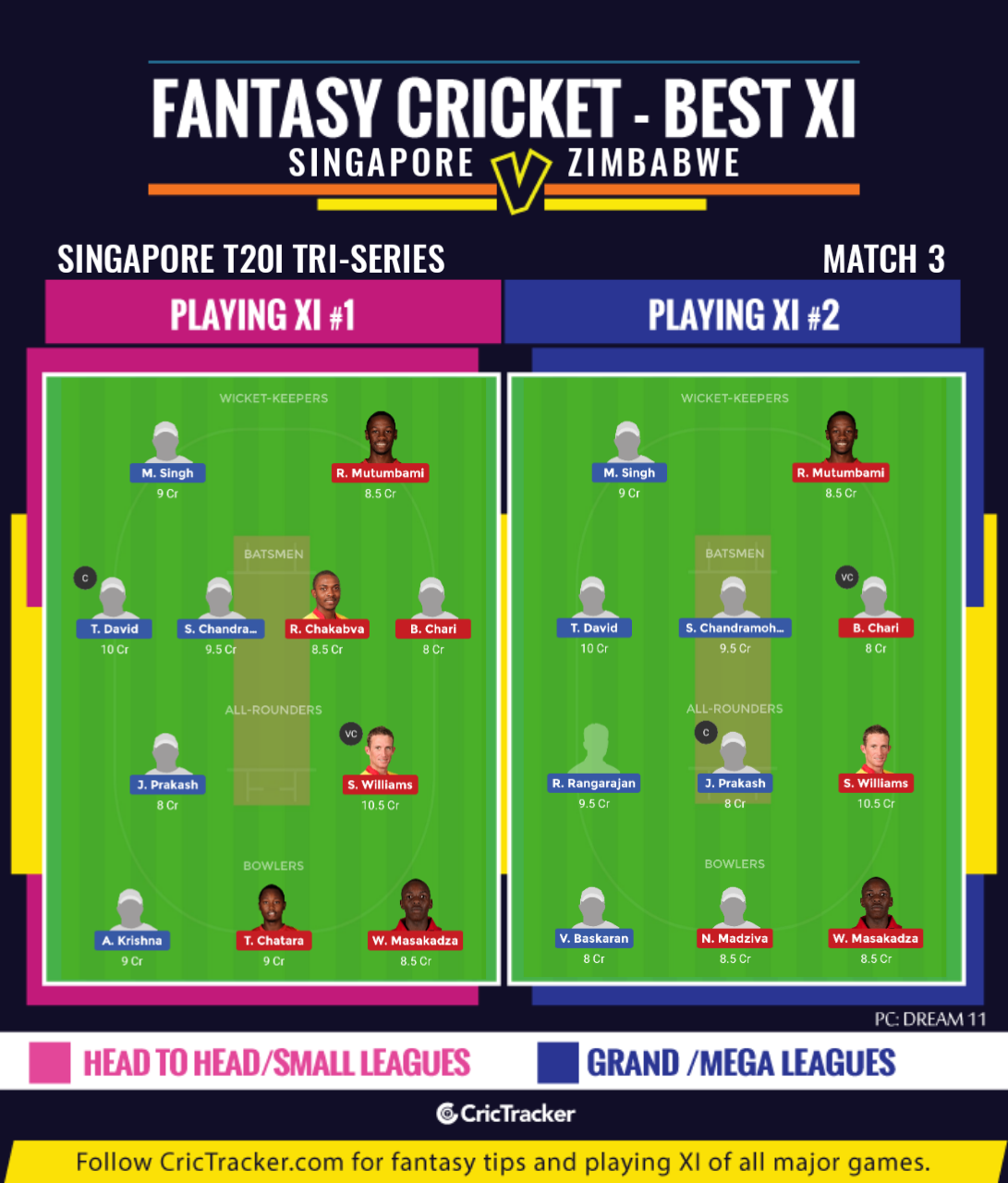 Ryan Burl is added to the Dream11 list. He wasn’t available for selection as he was a late replacement for Craig Ervine. Despite the failures in the game against Nepal, the Singapore bowlers can be trusted. Skipper Amjad Mahboob didn’t play the game but is expected to join them for the crucial clash against Zimbabwe.

Zimbabwe might edge past Singapore in a thriller on Sunday.