There are a couple of rain predictions in the morning.

Singapore has promised a lot in the tri-nation series at home. They lost to Nepal in their first outing at the Indian Association Ground. Paras Khadka’s century robbed them off a victory. However, the team, led by Amjad Mahboob, made a strong comeback against Zimbabwe, who were coming off a victory versus Nepal. Singapore won the game by four runs after putting up a significant score.

It was also their maiden victory over a full-member nation. It was an icing on the cake after they qualified for the 2020 T20 World Cup Qualifiers, beating Nepal in the final at the very venue. Their last game against Nepal was abandoned due to rain. In the last match of the series, Mahboob’s men are set to cross swords with Zimbabwe. They will dearly want to finish on top of the points table.

The pitch has been good for batting and runs have pretty much flowed in the series. The spinners need to keep a check on the runs as the fast bowlers won’t be getting much assistance from the strip. There are chances of showers in the morning, but not much during game time. The clouds will be there throughout with the temperature around 28 degrees Celsius. Dew will play its part as well.

Timothy David has been their standout performer with 105 runs at a strike-rate of 154.41. The likes of Surendran Chandramohan, Manpreet Singh and opener Rohan Rangarajan have also done their bit with the bat. In the bowling department, skipper Mahboob and Janak Prakash have been economical and have picked up wickets. But the duo needs some support from the other bowlers.

Sean Williams has led from the front with both and ball. He has 119 runs and six wickets to his name. With the willow, he has a strike-rate of 167.60. After the captain, Ryan Burl has been second-best with 74 runs and five wickets. Tendai Chatara has also been able to keep a check on the runs. Peter Moor played his first game of the series and he showed intent. The rest have chipped in as well.

The prediction is for Zimbabwe to win the match. 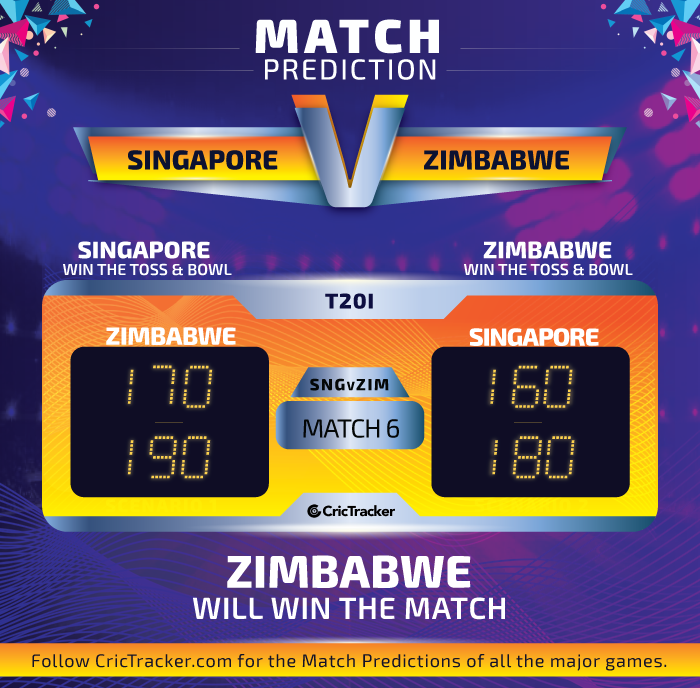