SOB vs TRT Match Prediction – Who will win today’s The Hundred Men match?

Both teams are coming off a victory in their previous game.

Southern Brave will take on the Trent Rockets in their next encounter at the Rose Bowl in Southampton in the Hundred Men’s 2022. With just two wins in six games, Southern Brave desperately need a victory under their belt in their campaign and will need to improve their net run rate.

On the other hand, the Trent Rockets have been splendid in their displays so far in the tournament and are at the top of the points table with five wins in six games. The Lewis Gregory-led side has a lot of match winners in their lineup and will be looking to continue their excellent run so far.

The Rose Bowl pitch proved to be a batting paradise in the previous game and hence, wickets in hand will be crucial while posting a total. The team batting first has won twice in the last three games and hence, the skipper would be looking to bat first after winning the toss.

Alex Hales missed out in the previous game against London Spirit and perish for just six runs. The right-hander has had a big impact at the top of the order for the Trent Rockets with some impeccable performances. Given his ability to clear the ropes at ease, Hales will be looking to provide his side with a fantastic start to set the tone.

Sam Cook has had a good tournament so far and with his extra pace, he can always be a threat to any opposition batting lineup. The right-arm quick finished with 2 for 10 in his spell in the previous game and was magnificent with his lines and length. He is likely to be among the wickets column for the upcoming fixture. 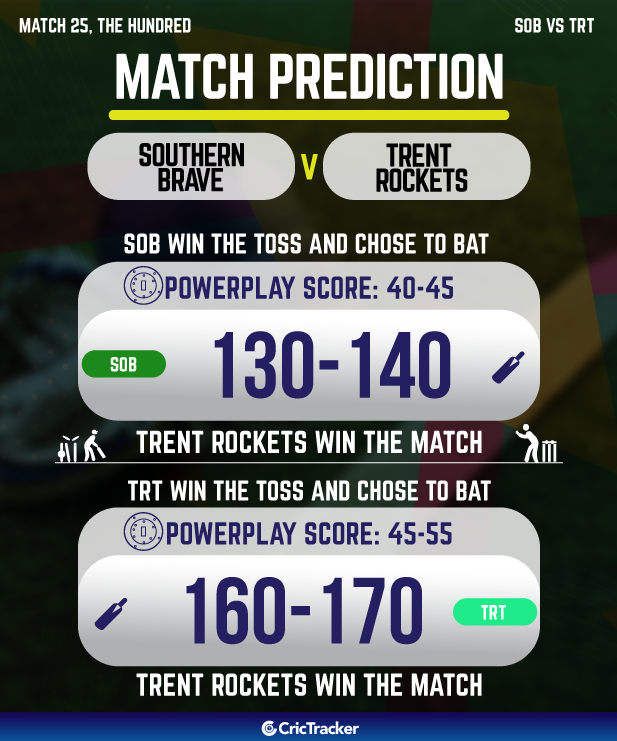