SA skipper Bryce Parsons is recovering from a back injury and will miss the first match.

The 1st game of the 3-match Youth ODI series will be played between South Africa Under-19s and India Under-19s at the Buffalo Park in East London.

The defending champions of the Under-19 World Cup, India, will be warming up for the upcoming event with a long tour of South Africa which will be hosting the tournament. India will be involved in a 3-match Youth ODI series starting on Thursday against the home side led by Bryce Parsons. Until a week before the major event, both India and South Africa Under-19 teams will feature in a Quadrangular series involving New Zealand and Zimbabwe. The Indian team will be led by Priyam Garg.

The first game of this series is expected to face no threat from the weather despite clouds around the venue throughout the day.

The Buffalo Park hosted only one Under-19 ODI game, that too during the 1998 edition of U19 CWC. It was a low-scoring encounter but the recent matches say a different story. Both the matches in the CSA Provisional 50-over Challenge at this venue witnessed 260+ total from batting first sides and the chasing team fared well in the reply.

SA skipper Bryce Parsons is recovering from a back injury and the vice-captain Khanya Cotani will lead the home team in the first ODI.

Yashasvi Jaiswal’s exploits in the last few months don’t need an introduction. During the recent ODI series against Afghanistan, the youngster scored an unbeaten century after picking up two wickets. Tilak Varma is in the same class as Yashasvi who has scored runs at a consistent basis and also been a handy bowler.

Jonathan Bird has an impressive record in Youth ODI cricket as he scored 549 runs across 8 matches with help of three centuries and two fifties. Tiaan van Vuuren has decent all-round record thus far. A couple of wickets and 20-30 runs can be expected from him. Gerald Coetzee picked up 30 wickets across all formats for South Africa U19s in only 21 matches and also scored 201 runs in those. 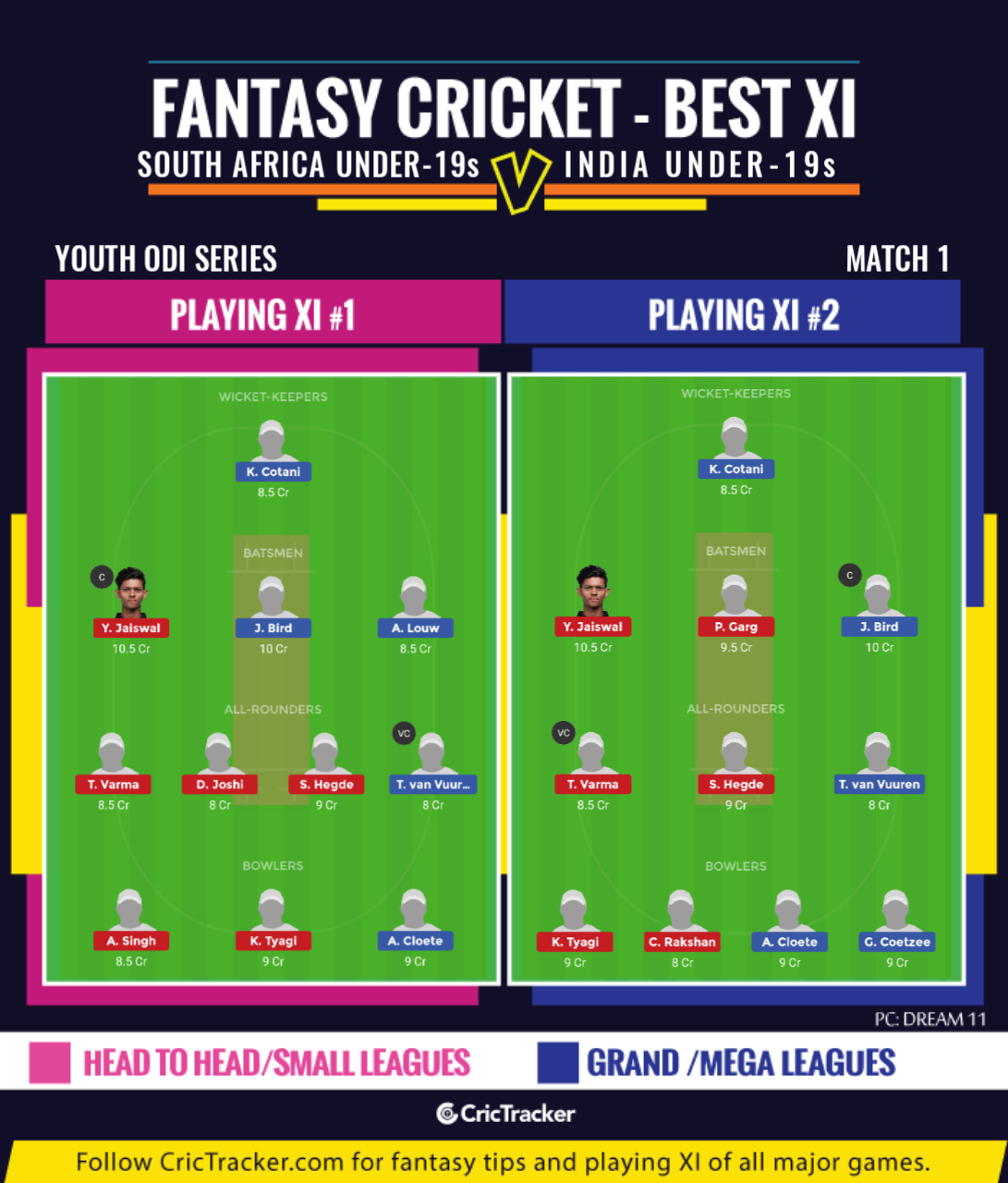 India has a long road ahead of the Under-19 World Cup and this 3-match series and Quadrangular series will help them in finalizing a perfect playing XI. Hence, it will be interesting to see which combination the Indian team could be preferring. Moreover, they have picked Hyderabad pacer CLT Rakshan for these two series but won’t be part of the U19 CWC. Hence, Rakshan could get a handful number of matches.

India Under-19s are expected to start their tour of South Africa with a win.