Temba Bavuma has been ruled out of the first T20I owing to a hamstring injury.

Australia remained unbeaten in T20Is in 2019 under Aaron Finch’s leadership. In their home campaign last year, the Aussies got past Sri Lanka and Pakistan without dropping much sweat. It’s now time for them to get their combination in place for the T20 World Cup in Australia later this year. Their first T20 assignment in 2020 is the T20I series against South Africa, starting Friday, February 21.

The opening match is at the iconic New Wanderers Stadium in Johannesburg. The hosts fought hard in the series against England and also took a 1-0 lead, but couldn’t hold on to their ground, ending up losing the series by a margin of 2-1. In the series decider, the home team also failed to defend 222 in their 20 overs. At the venue, South Africa have beaten Australia in three out of four matches.

The pitch in Johannesburg has traditionally been a batting friendly one. The average score in T20Is is 172 with 15 out of 28 games going in favour of the chasing teams. There are chances of heavy rain throughout the day with the percentage around 50 during game time. The temperature will be around the 24 degrees Celsius. There will be a fair amount of dew, especially in the second half.

Temba Bavuma has been ruled out of the first match due to a hamstring injury. In his absence, JJ Smuts is likely to open the batting alongside Quinton de Kock. The Proteas skipper is in red-hot form after scoring at a strike-rate above 200 in the previous series. Du Plessis should bat at number three.

Heinrich Klaasen should be persisted with after his blistering knock last time. David Miller adds more firepower to the batting. In bowling, Kagiso Rabada’s return has bolstered the attack. He will play a key role alongside Dale Steyn and Lungi Ngidi. Shamsi remains to be the lone spinner in the lineup.

David Warner and Aaron Finch have formed a lethal opening duo. The pair will be looking to build the platform with a quick-fire start in the powerplay. The ever so reliable Steve Smith will be in charge at number three. Carey has done well in the BBL and he will be hoping to replicate the form.

Mitchell Marsh and Matthew Wade would be trusted as the finishers as confirmed by coach Justin Langer. Ashton Agar may also get an opportunity. Mitchell Starc and Pat Cummins should be in the starting eleven with Adam Zampa. One among Jhye, Kane and Abbott should be taking the field. 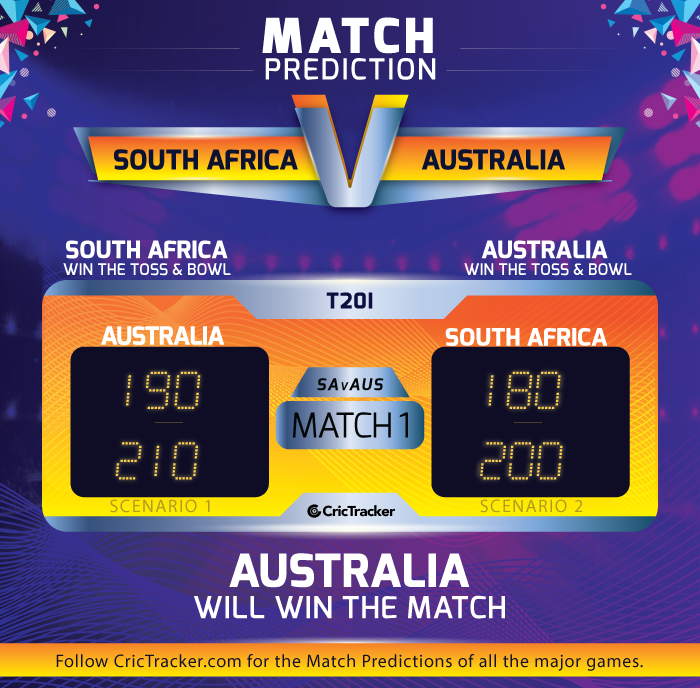