The Aussies are on a five-match winning streak in T20Is at the Newlands with their only defeat coming against Zimbabwe in 2007.

After the 107-run defeat in Johannesburg, South Africa found themselves in all sorts of trouble in the second game as well. However, at the St George’s Park, the team, led by Quinton de Kock , managed to stage a comeback. In the end, the Proteas won by 12 runs despite David Warne’s unbeaten half-century. With all to play for, both teams now head to Cape Town for the third and deciding T20I.

The Newlands haven’t been a happy hunting ground for the hosts, losing six out of 11 T20Is. On the other hand, the Aussies have a 5-1 record at the very venue. Their only defeat in Cape Town came against Zimbabwe in the 2007 T20 World Cup. Moreover, South Africa have lost both their T20Is versus the Aussies at this ground. But the hosts would be high on confidence after the series leveller.

The average T20I score in Cape Town is 156, which says that the pitch has been a sporting one in the past. But 13 out of the 18 matches at the Newlands have been won by the chasing teams. There are no chances of rain with the conditions being sunny. The temperature will mostly be around 20 degrees Celsius. The humidity will be a bit on the higher side with the numbers in the 70s and 80s.

The Proteas may think about bringing back Dale Steyn for the crunch game. Anrich Nortje did exceptionally last time, especially while bowling the last over. But it won’t be a surprise if the Proteas opt for experience. Tabraiz Shamsi has an economy of six and has been hard to get away.

Lungi Ngidi has four wickets, but at an economy of 11.14. Rabada had a decent day in the second game after leaking runs at 15 in Johannesburg. In batting, the onus will again be on Quinton de Kock. Moreover, if Temba Bavuma gets fit then he may replace Reeza Hendricks as the other opener.

The Aussies have depended heavily on their top three thus far. David Warner, Steve Smith and Aaron Finch have scored a chunk of the visitors’ runs until now. The rest are yet to fire on all cylinders. Warner would be disappointed though after his unbeaten 67 failed to guide Australia over the line.

Mitchell Marsh and Matthew Wade are yet to deliver as well. In bowling, Ashton Agar has clearly been the standout performer. Kane Richardson has also been accurate with an economy of 5.85. Mitchell Starc and Pat Cummins have been reasonable. Adam Zampa will also have his role to play. 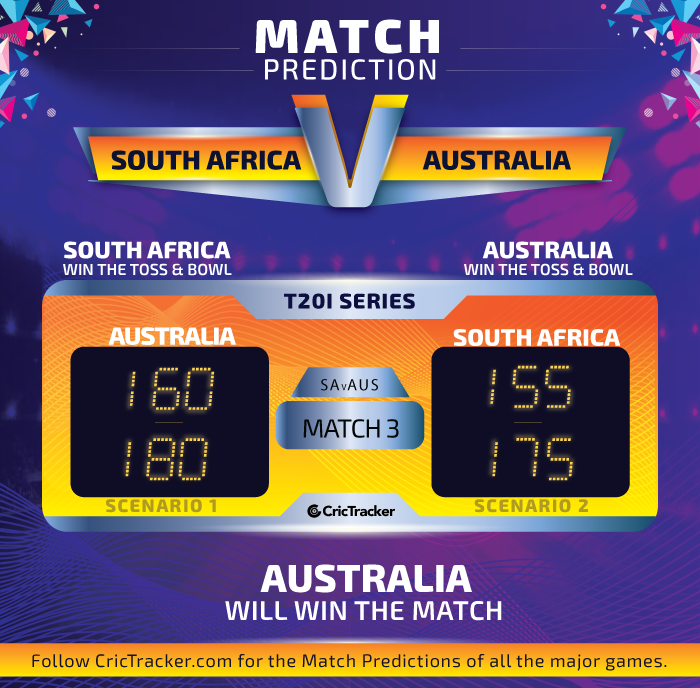