England’s top-order is in whirlwind form, coming into the ODI series. While the likes of Jonny Bairstow and Jason Roy notched up hundreds, Joe Root and Joe Denly racked up half-centuries.

The first game of the three-match ODI series between South Africa and England at the Newlands in Cape Town.

After a disappointing Test series, the beleaguered South Africans will be hoping to usher in a new era under a new leader and a relatively new-look squad when they lock horns with World champions England in the first ODI at Newlands in Cape Town.

The South Africans, in a bid to re-build towards the 2023 World Cup have handed over the leadership reins to Quinton de Kock and have included a plethora of new personnel like opener Jaaneman Malan, middle-order batsman Temba Bavuma, and Kyle Verreynne in the batting unit while the likes of Lutho Sipamla, Beuran Hendricks have been added to the fast bowling attack that will be led by a fitter and leaner Lungisani Ngidi in the absence of pacer Kagiso Rabada.

Things wouldn’t be as easy for South Africa as they will be up against the 50-over World Champions in the form of Eoin Morgan’s England. The 50-over World champions may be without the trio of Ben Stokes, Jos Buttler and Jofra Archer for the upcoming rubber but they certainly have enough firepower in the form of Jonny Bairstow, Jason Roy, Joe Root in the batting department, something they showed to the hilt in the two practice matches.

It is expected to be an overcast day in Cape Town on Tuesday. According to the weather report, clouds and sun are expected to play hide and seek throughout the day. While the temperature is set to be between 20 and 23 degrees Celsius, the humidity is set to hover around 80%. There are slim chances of rain to intervene in the match.

If you look at the most number of wickets taken by bowlers at Newlands, the list will feature all the top South African fast bowlers of the past like Shaun Pollock, Makhaya Ntini, Morne Morkel. In the top-13 leading wicket-takers at Newlands,, only have been spinners, which suggests the track normally aids fat bowling. And, with Tuesday set to be an overcast day, the fast bowlers might well rule the roost again.

Average first innings score:– 235 [In the 42 completed games at the venue]

Jaaneman Malan has been scoring heavily in domestic as well as T20 tournaments (Read: MSL) and it will be interesting to see how he and de Kock fare as an opening pair. Lungi Ngidi will spearhead the fast bowling department. The spin-bowling attack will be led by Tabraiz Shamsi, who was the second-highest wicket-taker in the MSL.

England’s top-order is in whirlwind form, coming into the ODI series. While the likes of Jonny Bairstow and Jason Roy notched up hundreds, Joe Root and Joe Denly racked up half-centuries.

It will interesting to see if England opts for both Sam Curran and Tom Curran or will they go with three-men spin attack in the form of Moeen Ali, Adil Rashid and Matthew Parkinson, who claimed five wickets in the two practice games. Chris Jordan and Chris Woakes will lead the fast bowling unit. 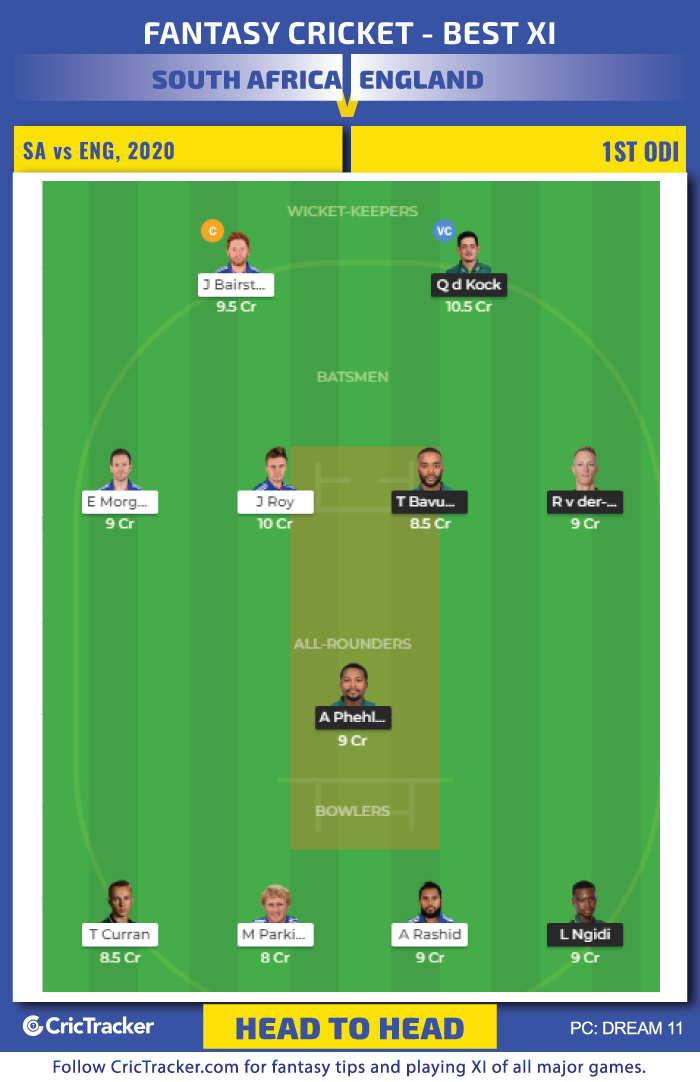 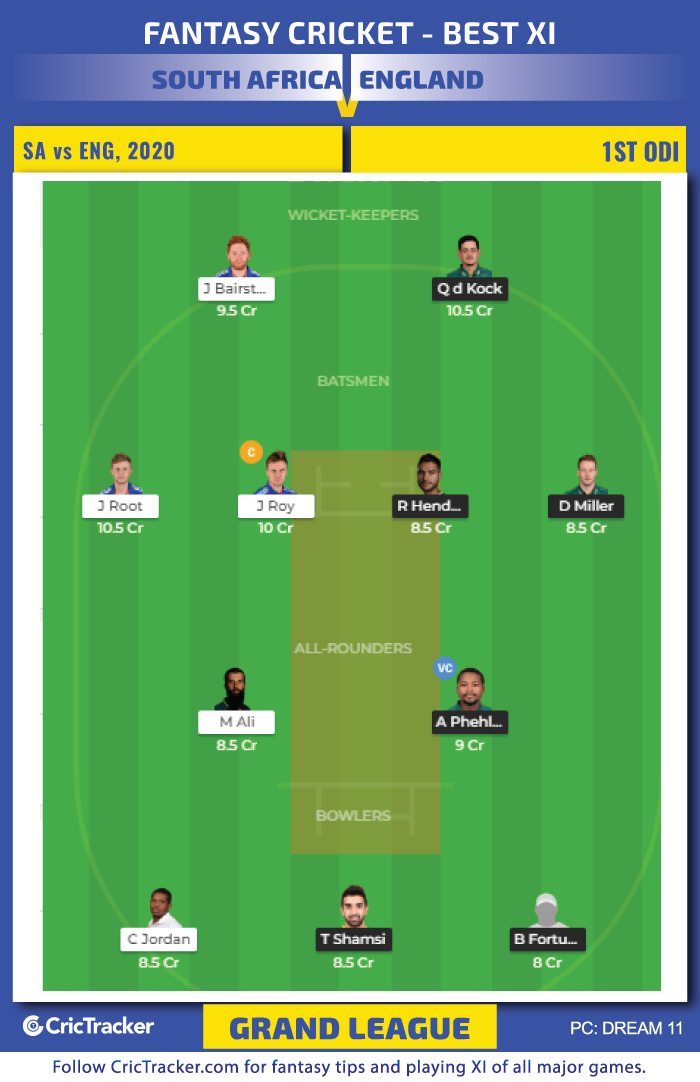 Both sides have power-packed top-order batsmen in the form of Jason Roy, Jonny Bairstow, Rassie van der Dussen, Quinton de Kock and Joe Root. Picking them as captain/vice-captain will be a good punt.

England is expected to come out as the winners.