England will be devoid of their World Cup 2019 stalwarts like Ben Stokes, Jos Buttler and Jofra Archer.

After visitors England clinched the four-match Test series by a margin of 3-1, a revamped South African will be eager to retaliate in the three-match ODI series. However, it will be an arduous task for the Proteas to skittle the Englishmen, especially in ODIs as the defending World Champions are brutes when it comes to limited-overs cricket.

However, Cricket South Africa has infused several new faces into the squad ahead of the ODI series. The hosts will certainly hope to deliver a much better performance in the limited-overs format under reigns of their newly-appointed skipper Quinton de Kock. Amid several new faces who are touted to make their ODI debut for South Africa in the series, Janneman Malan is anticipated to clinch his ODI cap to open the innings with skipper Quinton de Kock.

The Proteas middle-order will be bolstered by the likes of Temba Bavuma and Rassie van der Dussenn– who have delivered impressive performances for their national side in recent times. Talking about the bowling force of South Africa, De Kock will undoubtedly miss the services of Kagiso Rabada. Lungi Ngidi will be steering the Proteas bowling force in Rabada’s absence along with Tabraiz Shamsi, who is expected to fill in the void left by Imran Tahir. Shamsi had delivered impressive bowling spells in the MSL 2019.

England, on the other hand, will be embarking the ODIs for the first time since their World Cup 2019 triumph. The Eoin Morgan-led side also has incorporated fresh faces to their squad including Tom Banton, who is touted to possess immense potential.

In the absence of many stalwarts like Jos Buttler, Ben Stokes and Jofra Archer, the England side will be steered by Joe Root, skipper Eoin Morgan and Jason Roy. Moeen Ali is also expected to return back to the stage in style after being sidelined from the game for months now. The visitors’ bowling force will be steered by Chris Woakes and Chris Jordan along with the duo of Curran brothers. Tom Curran and Sam Curran– Either of the all-rounders is expected to bolster the starting XI with their recent form.

The Newlands pitch has been favourable for spinners where Adil Rashid and Tabraiz Shamsi will be eager to sparkle. It will be a good punt to bat first after winning the toss. The temperature is expected to hover around 28 degrees Celcius with moderate levels of humidity, according to Accuweather. Furthermore, there are no chances of rain to intervene in the match whatsoever.

All eyes will be on Quinton de Kock to steer a reinforced South Africa squad to success. Since making his national debut, Rassie van der Dussen has emerged as the forerunner of South Africa’s batting unit. The right-hander as amassed 664 runs in 18 ODIs at an impressive average of 73.77. Along with Van der Dussen, Janneman Malan is also expected to dazzle in his debut series. The 23-year-old has delivered impressive performances in First-class cricket.

After delivering consistent performances in MSL 2019, Tabraiz Shamsi is also expected to emerge as the flagbearer of spin bowling force of South Africa. Similarly, Lungi Ngidi will also be hoping to recreate his MSL 2019 exploits.

England will be devoid of their World Cup 2019 stalwarts like Ben Stokes, Jos Buttler and Jofra Archer. However, the trio of Joe Root, Jonny Bairstow and Jason Roy will be aiming to fill the absence of the World Cup stalwarts. 21-year-old Tom Banton will also be looking forward to leaving his mark on the international scene. Chris Woakes will be heading the fast bowling force along with Chris Jordan, who will also be utilized for his batting forte. The Sam Curran-Tom Curran duo is also anticipated to get a chance due to its all-round capabilities. 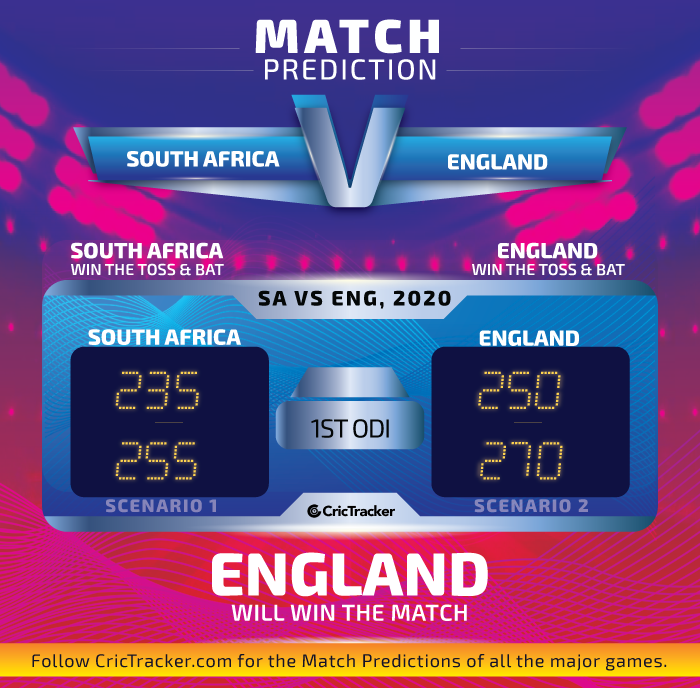