The hosts have a 4-1 head-to-head T20I record at home against the Brits.

South Africa have had a topsy-turvy campaign thus far in their home campaign against England. In both the Test and ODI series, the Proteas came out trumps in the opening games. But the hosts couldn’t hold on to their momentum. In the Pink ODI at the Wanderers in Johannesburg, the home came ever so close to winning the series, but in the end, allowed the Three Lions to a series leveller.

It’s now time for Quinton de Kock and Co to lock horns with a power-packed Brits unit in the three-match T20I series. The first game is set to be played on Wednesday at Buffalo Park in East London. Going into the next game, South Africa can draw confidence from the fact that they beat England in four out of five T20Is. At the Buffalo Park, the Proteas have a 1-1 record in the T20 format.

Only two T20Is have taken place in East London thus far where the average score was around 165. It’s a night match and hence dew is likely to play a part, especially in the second half. Bearing in mind the same, teams should opt to bat second. The temperature will be around the 22 degrees Celsius with the humidity in the 70s.

The Proteas are likely to open with Reeza Hendricks and Quinton de Kock. Hendricks’ form wasn’t all that great in the ODIs, but De Kock notched 187 runs at 62.33. Temba Bavuma got 148 runs and would be in a positive frame of mind. In the middle-order, Rassie van der Dussen will hold the key.

Miller got 69* in Jo’burg and he adds firepower to the lineup. Pretorius, Smuts and Phehlukwayo add depth to their batting. The hosts may field both specialist spinners- Shamsi and Fortuin- keeping in mind England’s vulnerability against spin. Ngidi and Steyn may get to share the new cherry.

Jason Roy and Jos Buttler should be opening the batting for the Brits. It means that Jonny Bairstow may not get to open. Dawid Malan is fresh from three T20 tons in 2019 and his role will be of prime importance. Eoin Morgan may be a bit out of rhythm, but that doesn’t undermine the skills he has.

Ben Stokes and the Curran brothers are more than capable with the bat. The trio will also play a key role with the ball. Chris Jordan is brilliant at the death and can also chip in with some handy runs. Rashid was impressive in the Wanderers ODI. One of Mahmood and Wood is likely to take the field. 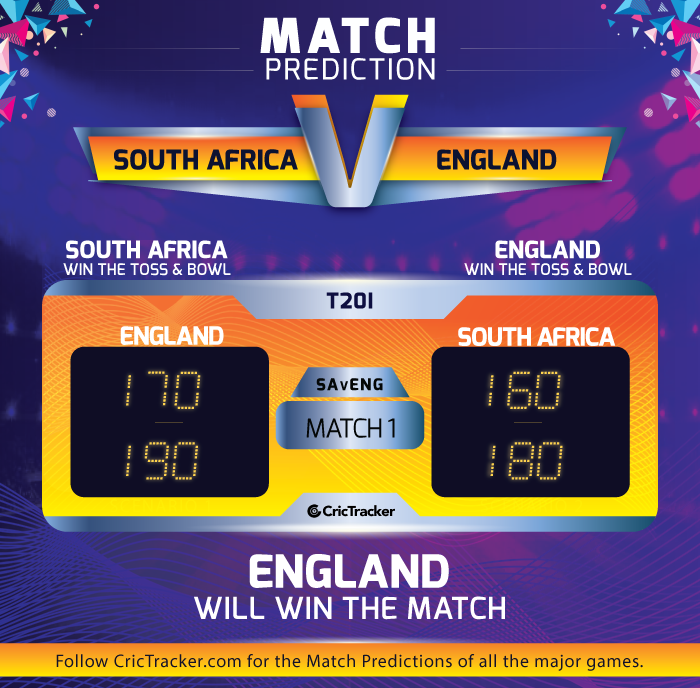